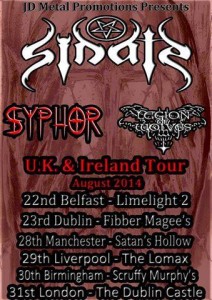 This weekend sees New Zealand Death/Thrashers SINATE hit our fair Isle as part of their Irish and UK tour Dublin Black/Death/Thrashers SYPHOR also in tow. Dublin’s LEGION OF WOLVES were also due to take part in the tour tour but due to an unfortunate arm injury to drummer Jason Connolly the band have had to pull out.

Nevertheless! The show must go on. And joining the tour for both the Belfast and Dublin dates will be Dublin’s AXIAL SYMMETRY, with Northern Ireland’s SERPENT added the the Dublin bill also!