Belfast’s BÄKKEN have released the track ‘Judgement Day’ from their upcoming ‘Worldwide Genocide’ EP due out in October later this year. The bands previous album ‘Death Of A Hero’ was, and still is, an absolute cracker and caught this listener totally by surprise on it’s release. So anything new from these lads is eagerly awaited here at the Irish Metal Archive camp. 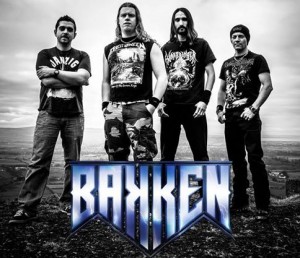 Probably the best thing going for BÄKKEN is that they wear their many influences on their collective sleeves. With the likes of MAIDEN, PRIEST, LIZZY and practically every classic 80’s Metal band shining through on their debut album. ‘Judgement Day’ is no exception. On this new track they have managed to merge MEGADETH style riffs with some progressive elements and their trademark 80’s homage while also keeping it fresh enough to appeal to modern metal fans. And Simon Pickett’s vocals also follow his familiar Hetfield/Heafy style but with a hint of Mustaine creeping through also.

The band recorded and mixed the EP themselves, which they say “…is a good example of the route we are taking”.