It perhaps might strike the revival of N.W.O.B.H.M by some as peculiar to many. For quite some time, it seemed to be destined to the annals of musical history as it was quickly swallowed up and cast aside by the arrival of other forms of extreme metal in the eighties and the alternative scene in the nineties. Most of the outfits who weren’t IRON MAIDEN, JUDAS PRIEST and the likes went their separate ways and were forgotten about. Perhaps only to reappear, when random compilation CD’s were released’ and then to disappear. Fans, although hopeful, were resigned to the fate of many of these outfits. 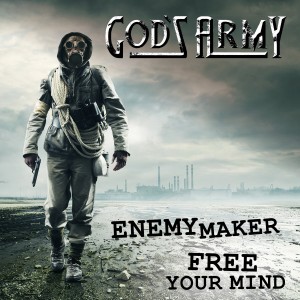 This was up until about ten/fifteen years ago. Suddenly, it seemed that a whole swathe of bands were paying due credit to the likes of DIAMOND HEAD, ANGEL WITCH, SAXON, TYGERS OF PANG TANG and more. Scenes as disparate as Canada to Sweden saw the return of catchy, melodic guitar lines, choruses with hooks to beat the band and powerful drumming. Older bands began to reunite, tour again and release new music. This has been replicated in Ireland by the emergence of bands such as RABID BITCH OF THE NORTH, MAVERICK, SIROCCO, STEREO NASTY, TERMINUS and more.

Away from the association of South East Asian factions and American religious support groups, GOD’S ARMY have been steadily building up a decent level of support. Ian O’ Sullivan is of course familiar to many through his association with HALLOWED and CARNÚN RISING. The band came together through his past associations with fellow HALLOWED member Dario Trobok (A.K.A John A.B.C Smith). A band was formed, with the intention to release an album. As is too often the case, issues arose and it was put on the shelf. A reappraisal of matters in 2012, saw a re-working of their original mixes and a renewed interest from all involved. This was eventually released under the GOD’S ARMY A.D. bracket due to legal constraints and they have been going since then.

This ‘Enemy Maker / Free Your Mind’ two track single was released back in April 2016 as part of a promotional effort to gain interest prior to the release of their second album. Thankfully, it builds on the form of their previous album. Clearly, the spirit of WARLOCK, HELLOWEEN, GAMMA RAY, RAGE and THE SCORPIONS loom large in their sound. This is perhaps, not a surprise due to the time spent in Germany by O’ Sullivan and the presence of former ‘live’ Scorpion, Mark Cross. ‘Enemy Maker’ and ‘Free Your Mind’ zip by in a comparative blur of sturdy bass work and powerful vocals from Smith, strong and catchy lines from O’ Sullivan and Eddie Van Dahl, and solid drumming from Cross. O’ Sullivan and Dahl also back up well in terms of vocals. Most notably on the second track. Smith’s vocals shows a decent range from chant worthy choruses to creepy insinuations. The combination between O’ Sullivan and Dahl is especially impressive. 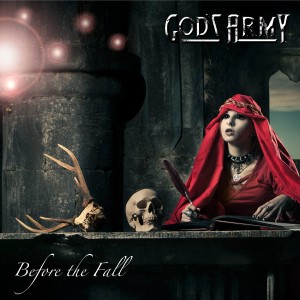 A third track, ‘Before the Fall’ has also been released as a digital single in late 2016 and is available as a free download, along with the original single, via the bands official website ( https://godsarmymusic.net/ ). The track stretches issues out a matter and allows all members display their array of talents. It starts off with a slow and steady guitar solo, aligned with a steady drum beat before the introduction of restrained vocals. These gain in tempo as the track develops along with the music before all reach a crescendo. It lets both guitarists unleash in impressive fashion to a stonking back beat from Cross.

All three are definitely made for the live arena as well. And the band are set to play a number of dates in Germany in preparation to the second album. Here is hoping for more of the same when it eventually comes around. A couple of shows over here would be nice as well.