Does “Pirate Metal” really exist? Every couple of years we get reminded that it does. There is really only one band that does “Pirate Metal” consistently well and they also happen to the be the originators of the genre. ALESTORM have been around for years now but they show no signs of slowing down and have continued innovating with their latest album, “No Grave But the Sea”.

The five piece band hails from Scotland and the UK mostly. The lineup has changed a few times through the years with Christopher Bowes remaining as ‘captain’ and the only original member. And his current crew consisting of long standing members Elliot Vernon, Belfast natives Pete Alcorn and Gareth ‘Gazz’ Murdock, and their latest deckhand, Máté Bodor.

People tend to right off this band as cheesy and gimmicky but metal snobs tend to look down on bands that just like to have a bit of fun. This album is filled with great musicianship and technical ability that gives the bouncy feel of it more substance. 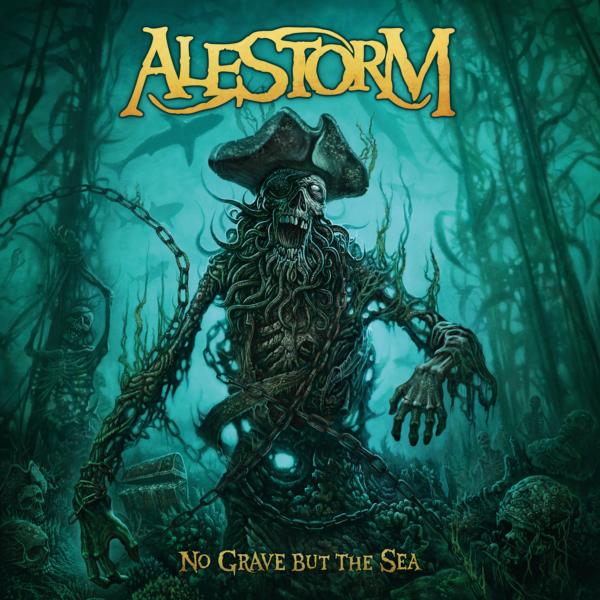 Each track features a little surprise that keeps the listener on their toes. ‘To the End of the World’ and  ‘Alestorm’ are more traditional power metal tracks that this band has been doing well for ages. However, there’s a really interesting video game influenced synth intro to the song ‘Mexico’. The synth starts out like the start to a 90’s game and gradually descends into a piano riff. The synth work distracts from the lackluster lyrics of that track. The catchy video game synth effect was debuted on the song ‘1741 The Battle of Cartagena’ and has been used really well since then.

Since it’s a unique genre, the themes don’t change too much. Drinking, looting, having sex with prostitutes, think an R rated Jack Sparrow. As Bowes says, “A pirate’s life is simple we drink, rob, steal and kill.” The increased interest in pirate lore and history brought about by the Pirates of the Caribbean movie franchise and the Assassin’s Creed video game continue to breathe life into this genre. There is no need to stray from what makes good pirate metal but the vocals have noticeably been mellowed out a bit since earlier albums.

The lyrical content is simple but the variety of instruments, the horn section, awesome solos and great studio production make this album worth listening to. Make sure to check out ‘Fucked With an Anchor’ a classic and very funny Alestorm song that captures the band’s whimsical spirit.