Founded in 2009, this death/industrial outfit has been extremely busy recently. From the early embryonic stage of a studio-based duo, they have expanded on their lineup to fulfill ambitions to play more live dates, which they have done whenever opportunity fell their way. From missing out closely at The Wacken Metal Battle in Ireland to supporting ABADDON INCARNATE on their recent tour, AXIAL SYMMETRY have been able to flesh out their sound and message. And much has been done to spread the word about this new release. 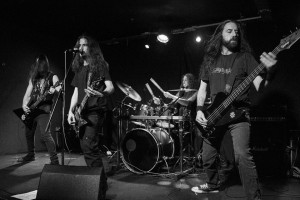 If their debut EP “Nothing Is Left” had promise, then this is a noticeable step-up in all facets. The HYPOCRISY/NEVERMORE influences still remain but much of the fat has been removed to make it leaner, tougher and to the point. It is undoubtedly a political record but without taking sides. It has more the effects that decisions made have had on the world as a whole.

The opening track ‘Freedom Machine’ sets the mood nicely. An entirely instrumental piece which swaps brevity for atmosphere that is emphasised by incorporating an audio track decrying the effects on humanity by governmental institutions and multinational corporations. Gavin Doyle is key to this. His use of sampling and effects create the sense of tension and foreboding. Although more electronic than metallic, it works on this occasion. 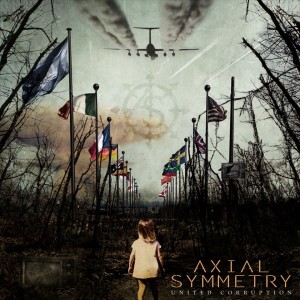 The stand-out tracks for me were ‘A-21’, ‘D.F.E.’ and title track ‘United Corruption’. The first is unashamedly full on death metal. It combines great leads from Matt O’Brien and Doyle with subtle electronics throughout. The guitar work displays switches in tempo according to its requirement and incorporates a delicious solo to boot. It was based upon the controversial Agenda 21 which is accused of removing indigenous populations from areas of the rain forest. The second slows the pace down considerably to more of a mid-tempo groove. It allows more space for the vocals to show their strength and some nifty bass work from Dave O’ Reilly. This works up to a blistering full throttle section half way through. The change is done effortlessly and displays their skills. The title track, meanwhile, is more raw and energetic in its approach with plenty of pace, weight and is flat-out heavy. A suitable way to conclude the EP.

‘End of Privacy’ and ‘Modified Genocide’ were two that failed to do it for me. The former seemed to have the members competing against each other for room to make themselves heard and the latter was just a little samey. Nothing particularly bad about either. Both had decent guitar lines yet again and ‘Modified Genocide’ gave Diego Rodrigues his chance to shine on drums. Overall though! A thoroughly enjoyable listen.