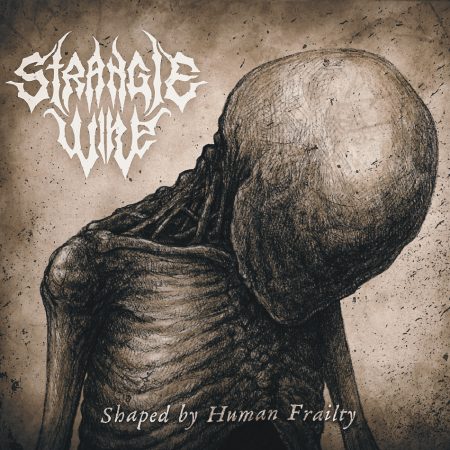 It’s been four years since Belfast’s STRANGLE WIRE hit us with the devilish, psychological horrors of The Dark Triad EP. Over the course of those intervening years the band have clearly been honing their skills and focussing their fearsome intent, because they have returned with a full length debut album that unleashes unforeseen levels of gargantuan heaviness. No matter how impressive the twisted muscle and malice of The Dark Triad might have been, STRANGLE WIRE have attained a whole new level of potency and power with Shaped By Human Frailty.

Something has clicked perfectly into place with Shaped By Human Frailty, because STRANGLE WIRE have created an utterly exemplary document of death metal. The song writing, the mastery of atmosphere, the balance of tempos, the sheer monumental force wielded by these new tracks is breathtaking. Songs like ‘Learned Wretchedness’ carve their name into the soft tissue of the brain, leaving indelible scars across your memory with their measured malignance. Every riff is a snarling monstrosity, every drum beat a skull rattling concussive strike, every word torn from a bleeding throat weighted with sinister significance. The superb production, mixing and mastering work of Chris Fielding (Electric Wizard, Primordial, Napalm Death, Hooded Menace and many more) at Foel Studios has created the prime sonic habitat in which every element of these bloody, predatory songs can thrive. Shaped By Human Frailty will speak to the rotten heart of every dedicated death metal fan.

When Grindscene Records release “Shaped By Human Frailty” on September 30th they will be setting the standard for every death metal album that follows in its wake. STRANGLE WIRE have returned to the fray, armed to the teeth with an awesome array of abominable weaponry and are set to carve their way through the death metal ranks. Brace yourself, because the carnage is about to begin!