It’s always a treat when our Belfast brethren make a trip to our countries ‘Deep south’. And when two of Northern Ireland’s best new doom outfits, NOMADIC RITUALS and TOME, hit the road south to promote their hefty recently released 12″ vinyl split single, it was guaranteed to make a great night. Hitching a ride for the show was Kildare’s long standing traditional/epic metallers OLD SEASON, after a number of years in metal wilderness and isolation, who are finally back on the gigging circuit with impressive new vocalist John Bonham. 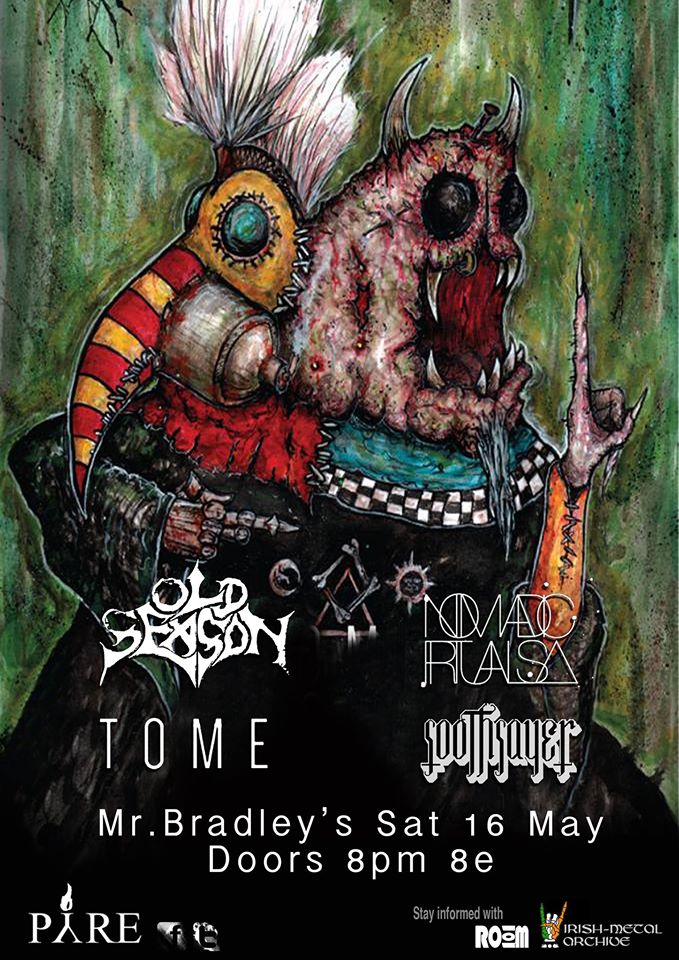 Cork’s own SOOTHSAYER were originally slated to open but had to pull out a few days before, ironically due to ‘unforeseen circumstances’. ( 😛 ) So it was left to NOMADIC RITUALS to kick off proceedings tonight. And in expected filthy fashion an unrelenting bombardment of slow and trudging riffs, some seriously low end bass and thumping rhythmic drums are thrown into the cauldron as the band aired not one, but two of their newer and as yet unreleased tracks to those in early attendance. Both of which are planned for inclusion on the bands next album. ‘From Nothing’ and ‘Far From The Sun’ make up the first half of their set and showcase an even murkier side to their already crusty sound. Filling out the second half of their set with a monolithic thirteen minute take on the colossal ‘The Great Dying’ from their current split LP, the crowd are swept up in it’s wake and carried powerlessly only to be discarded abruptly after the climactic finish.

After taking a little longer than expected to set up in the venues cramped and unorthadox stage area, next up were Kildare’s metal veterans OLD SEASON. The band have been toiling away relentlessly in the background for the last few years but are back in action once more after a lengthy search for a new vocalist, they now have John Bonham in their ranks. And he proves himself to be more than capable of the task right from the off with opening number ‘Prowler’. Not wasting any more time they immediately launch into ‘Scavenger’, the first of two new offerings being showcased on the night. An up-tempo rocker that instantly grabs the crowds attention despite almost everyone not being familiar with it at all. One of the highlights was the inclusion of ‘The Claw’ from the bands debut “Vol 1” album, and also one of the only remnants from the bands early beginnings as KARNAYNA. Despite having not played the song live in over five years and battling a few technical gremlins, the band still execute it brilliantly. Following it up was another live favourite, ‘Mortals Of Mettle’, with it’s classic metal “Woah-ohh, Hoo-ohh…” singalong getting the crowd raising their fists and punching the air. Not missing a step the band play straight into the second new track of their set, giving ‘The Chosen’ a road test ahead of their planned album recording in the coming Autumn. Time constraints forced them to drop ‘Meet Me On The Battlefield’ from their set and opted to finish with another fist punching fan favourite, ‘At The Hollow’.

Final band of the night is TOME. Not a million miles different from NOMADIC RITUALS. Perhaps a touch dirtier sounding but certainly no less as impressive. Opening with a lengthy and as yet unreleased track they lay their brand of impressive sludge thick and heavy across the venue. Everything is turned up to eleven as the band move on to deliver ‘Bone Divinations’ from their current split LP. Another long and murky track that trawls through the venues PA to pummel the swaying and nodding revellers. The riffs are hurled and spat forward in unrelenting fashion as TOME keep to the task at hand and with their set moving on they begin to take on a much more individual stance and eventually occupy their own sonic space or plane. And by the time they hit us with ‘In Fire And Ash’ and closing number ‘Void Cantation’ from their 2012 demo tape, everyone is completely engrossed in the music, the atmosphere, the mood and simply lost in it all. And that’s what I love most about sludge and doom metal, no matter how heavy the band are.