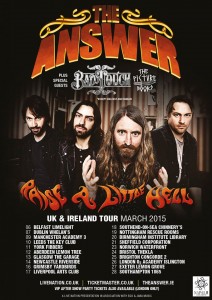 There is something that consumes me every time I see these guys live… Why aren’t they any bigger than they are? They have the songs, the right attitude, the passion for what they do. Only thing missing is radio play among certain “Rock stations”. With a sold out venue ranging from all ages, Whelans was ready for a night of pure rock and in support of their new album “Raise A Little Hell”, THE ANSWER did not disappoint.

With Cormac Neeson displaying his groove dancing before he has even sung a note, we are hooked. It’s not long either till the ladies in attendance are following his hips and are dancing too, while the men are foot tapping and nodding the head. Paul Mahon’s guitar work is as fluid as ever. Most bands would kill to have him among their ranks. Bassist Mickey Waters is like a man who is not only playing bass and doing backing vocals but is also sporting the biggest grin I’ve ever seen live from a band member, and that is coming purely from the joy of playing of what he believes in. With new tracks fitting right in amongst the older tracks it’s baffling how most major radio stations haven’t picked them up for regular airplay.

Things slow down for one song and it’s at this point that Cormac coaches James Heatley out from behind his drum kit. Displaying their talent to put a slow downed number in their set shows the confidence this band has in each other. The title track from the new “Raise A Little Hell” album sees Cormac in amongst the crowd, while new track ‘Summer Breeze’ comes across as a breath of fresh air. Forewarned that every time it’s played it turns into a jam it has definitely peaked our interest and it didn’t disappoint. Shame that the song had to end as it seemed we all enjoyed it.

The encores are soon upon us and it’s shame it has come so soon. Running a poll online for a song you wanted to hear live the guys were only happy to announce that the winner was ‘Nowhere Freeway’. It didn’t let us down and had everyone singing along, just wishing that the feeling of being this naturally high could go on for longer tonight. But alas it was over. although not before the whole crowd got to sing ‘Happy Birthday’ to Cormac. And with four smiles on their faces, the boys in THE ANSWER left knowing that we wanted more and that due to restrictions in place they would’ve happily played for longer.

Till next time, lads… Raise some hell on the tour for us all…  \m/