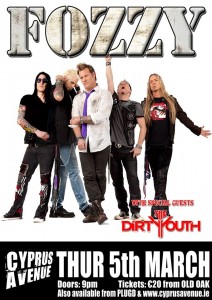 The place is full up almost off the bat for FOZZY tonight. Cyprus Avenue is no stranger to the stars of pro wrestling, and its regular crowd for such events is here in full force, scoping the merch table and comparing shirts. Strutting on up the front for kick-off, though, a branded ego riser and diamanté microphone stand are immediate cause for concern. THE DIRTY YOUTH, from the UK, set about justifying such concerns almost immediately with a set of comprehensively derivative tunes that steal all the most tedious parts of Iron Maiden, PARAMORE and god-awful American radio-rawk and mesh them into a horrible mess that somehow actually succeeds in making the time pass slower. The lads have all the moves and all the dry ice and the beautiful rock ‘n’ roll uniforms, but aside from their music being completely charmless, they’re suffocatingly dull as stage personae, trading in rock’n’roll cliché that frankly veers on insulting (“we all know the Irish like to drink”, etc.) at times to the point where the crowd simply doesn’t respond. They go on stage, go through the motions, and head away. No heart, no soul, no tunes. All style, no substance.

And don’t get me wrong, either. I’m not expecting stellar things from FOZZY:a supergroup composed of WWE legend Chris Jericho and members of STUCK MOJO very much have their target audience, and it’s certainly not your writer, and that’s fine. As a lifelong wrestling fan, your writer has enough respect for Jericho’s insane body of work to give it a fair hearing, and is amply rewarded. Classic-rock antics abound, big riffs and bluesy squalling are everywhere as the lads peel off song after song of tales of woe and wicked women, and the crowd assembled eats it whole. The whole thing is polished and more of an “experience” than a gig, but it’s the best thing in the world to see Chris Jericho, in his pomp and circumstance, smiling and evidently chuffed to be in front of an appreciative, hamming up his “Ayatollah of Rock ‘n Rolla” schtick to wondeful effect. A lifelong fan of KISS, ALICE COOPER and such, it’s easy to see where he gets it, and no doubt his years of showmanship have polished him up and made him shine. His eye contact, stage presence, everything, makes him the centre of attention of course, but he also ties the whole outfit together perfectly. And that’s the joy of it. Here is a man who has made a car wreck of himself for our entertainment for the last twenty-plus years, travelled the world and put himself through hell, paid his dues and had his run on top, and he had emerged on the other side, healthy, happy, jamming with buddies, and making it work. For all the horror stories pro wrestling has turned out of broken bodies and ruined lives, Chris Jericho, (as Moongoose McQueen!) is living proof you can have your cake, eat it, and do it all on your own terms.