As part of the second wave of black metal, Norwegian band SATYRICON, remain highly regarded among fans of extreme metal. Albums such as ‘Dark Medieval Times’, ‘Shadowthrone’ and ‘Nemesis Divina’ still rank highly in lists of the greatest ever black metal albums. They proved adaptable to changing times around them and incorporated a number of different elements into their music. It may have seen a rise in profile and exposure but still managed to retain the essence of who they were.

It was therefore a no-brainer when it was announced they were to play Dublin on their latest tour. The band are still riding high on the success of latest album ‘Deep Calleth Upon Deep’. The bleak winter may have been an appropriate backdrop to them but it may have proved a nightmare to get around. Thankfully, that had all relented by that point. Arriving into a busy Dublin Saturday afternoon presented its own problems. Particularly when you add a six nations encounter into the mix. The expected hordes of drunken Scots are light enough on the ground, being located in bars around Temple Bar. Plenty of metal fans were milling around the venue and the excellent Drop Dead Twice across the road. The selection of craft beers on tap, plus the result of the France-England encounter, had put many in good spirits.

It was fast approaching show time. Since the Tivoli had reopened, I had not managed to venture there. And on first impression, it looks quite well. The stage is set central to the site, a large smoking area and plenty of viewing areas. Frustratingly, the merch area seems to be closed prior to the start of the gig, which resulted in many being unable to pick up some gear. The crowd is now building up quite nicely and just in time to catch openers, THE CRAWLING. Other locations in Europe had seen SUICIDAL ANGELS as the tour support. Personally, I thought tonight’s choice was entirely appropriate. Their blend of blackened doom fits in well with the old school crowd. Especially those who had been to see PARADISE LOST recently. What strikes me from the minute they start up is the quality of sound. Kudos to Rats on that front. Kicking off with ‘Immaculate Deception’, they set out their stall immediately. A distinct air of bleak melancholy fills the air with a crushing concoction of beauty and despair. Much of their set is based around their debut album, ‘Anatomy of Loss’… one of the finest Irish releases of last year. They take the occasion to perform a new track as they build towards a potential follow up. ‘Promises and Parasites’, sounds just the ticket to these ears anyway. It is clear the connection formed between the band, as they complement each other wonderfully. Clarke’s vocals when set against those of Rainey’s work to a tee. 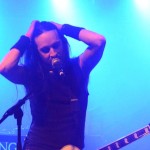 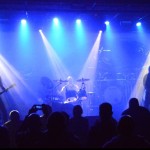 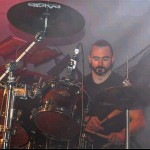 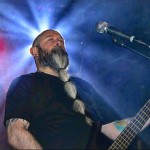 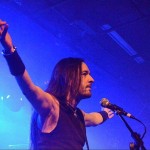 A blistering version of ‘Catatonic’ is unleashed, complete with those elongated instrumental sections that embody the band. Being able to switch between bleak and sorrowful to all out weight. Gary Beattie’s drumming is on the money throughout, even if he is somewhat overshadowed by the percussion tower behind him. Most of the tracks feature audio clips played over them. It can seem a bit stilted when done incorrectly, but blend in well here. A slow thud preempts the arrival of ‘Acid on my Skin’, before unholy war is discharged. It is a number which is quickly becoming their anthem. A trip back to their debut EP for ‘Right to Crawl’, sees them bring a highly satisfactory display to a close. They are due to return to Dublin for ‘Metal 2 the Masses’ at the end of April. It will allow them inflict more misery on the capital. Hopefully, their anticipated second album will be nearer to completion then.

A quick dash to the bar, and then to find a suitable viewing space for the main event. If the show was not sold out, it is certainly near enough to it. Testament to the bands enduring legacy. A roar greets the arrival of the enigmatic duo of Satyr and Frost, flanked by their touring members. They choose to demonstrate their fate in their new album, opening with ‘Mid-night Serpent’. Despite the various musical styles they have incorporated into their music over the years, it is refreshing to note the distinctive cold and austere sound shining through. A quick dip into their self-titled album, before a powerful rendition of ‘Black Crow on a Tombstone’. It is one that never really clicked with me on the recorded version. Tonight, it possesses an energy and vitality. The chants from the crowd reflect this. Satyr can often come across as being distant and not willing to engage. Here, he commands attention and whips up a sea of horns. He is flanked on either side by Anders ‘Neddo’ Odden and Steiner ‘Azarak’ Gunderson. They are unassuming enough to do their job well but not hog the spotlight. ‘Ageless Northern Spirit’ and ‘Repined Bastard Nation’ arrive as a reminder of the era when they begun to broaden their sound to assimilate post rock, goth and rock.

The old school fans are present in numbers and delighted to witness the one-two of ‘The Wolfpack’ and ‘Now, Diabolical’. One might expect the pace and energy in the gathered mass to drop somewhat upon the introduction of two further new tracks. ‘To Your Brethren in the North’ and ‘Black Wings and Withering Gloom’, still sound immense. And then we travel all the way back to the very beginning. It has been some time since we ‘Walked the Path of Sorrow’. Indeed, I have never seen it performed live. Truly a majestic experience. Glacial riffs, pounding blast-beats and atmospheric keyboards from Anders Hunstrad. It is a reminder of how exhilarating they sounded on their introduction. Grown men are almost seen to weep such is its grandeur. It is clear to see the connection built up between crowd and band. The atmosphere is electric at this point. As we take a trip to ‘Mother North’, the drama is heightened. The ‘Now, Diabolical’ track is quintessential SATYRICON. On its completion, the band do the customary farewell just to tease the crowd. A step off stage and instruments laid down. Surely that can’t be it?

Of course it isn’t. They are roared back on stage and stride right back into another classic, ‘The Pentagram Burns’. The majesty and dark under current seeps through. It would be remiss to describe them as a satanic black metal band where there are so many facets to their sound. Satyr continues to give it loads like the black metal Gary Numan he resembles. Following that up, the band lash into ‘Fuel for Hatred’. Another bow and tease occurs before the immortal ‘K.I.N.G’. It is always a number guaranteed to evoke a passionate response. Plenty of raven claws being shown in the crowd. As much as we wished for them to continue on and play for longer, they bid us goodnight. Promises are made regarding their quick return.

The crowd drifts off into the night. Conversations are brought up as to how this stacks up in terms of gigs of the year and even against shows by Emperor in London. I’ll leave that to another day. For now, I’ll be happy to enjoy the occasion, grab some pints with the lads and get back to Cork. Until the next time….