Appearances by SACRED REICH have been few and far between on these shores.  Some of the older heads among us may recall a ram packed McGonagles on ‘The American Way’ tour in 1990.  More recently, the reunited lineup played a somewhat lacklustre gig at Whelans in 2012.  Having only caught the band at festivals, I was keen to attend this show.  A Sunday night gig in Dublin is always going to be a stretch but you’ll find a way to get around it.  A crowded bus, spotty WiFi, lost looking G.A.A fans and an utter lack of ATMs in the area was more annoying but a quick pint and chance to unwind soon solved matters.

Doors were set to open at half-six but already people were gathering outside. The chance to have merchandise signed by the band proving to be a major temptation for most. As soon as the doors opened, throngs gathered by the stall to meet and chat with the members. Whilst that was taking place outside, ANIMATOR were getting set up inside. On the back of a promising E.P release, ‘The Venom Within’, and a trip scheduled for Wacken in the next few days, the band were eager to show the audience what they could offer. They might be relatively new in terms of this iteration but they all have been playing for a number of years previously under their former title of HERESY. As with the headliners, ANIMATOR are looking back in a sense. Debut album, ‘Blacklisted’ gets a number of airings including ‘Dreadweb’ and ‘Manipulator’. The latter being dedicated to a chap called Neil. Probably a bit of a backstory to that one, no doubt. They even went all the way back to debut EP, ‘Open Your Eyes’ for the crowd favourite ‘False Flight Attack’. They seem to be getting a decent reception so far with the vocals being chanted back in response and many heads banging along. 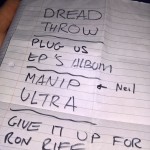 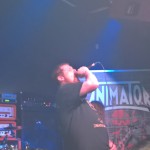 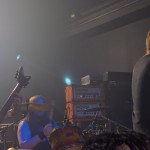 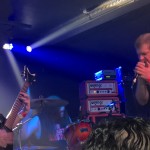 It is the new material that seems the most interesting however. ‘The Venom Within’ seems to have more nuances and subtleties about it. Less reliant on a full-frontal attack, and more confident in their ability to maintain power even when they bring the tempo down. More elements of groove and crossover to their sound. ‘Throwing it Away’, ‘Sticks and Stones’ and ‘The Venom Within’ all get an airing. Although only out a few months, it seems to have caught on with a lot of people already. They finish off an impressive set with ‘In God we Trust’. I always prefer to see a front-man play an instrument because they can look a bit lost when others are playing. Just a slight quibble with me. A mic becomes detached at one point and the vocals struggle to be heard at times afterwards. Ryan Treanor’s mic continues to droop below his height and has to be helped up by a member of the audience. Not the fault of the band however and hopefully they do themselves justice at Wacken. 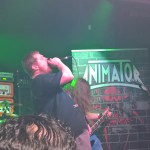 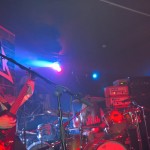 And now time for the headliners. It seems implausible that ‘Ignorance’ is reaching its 30th birthday. Many of us can remember the impact it had at the time. It provided a retort to the hardcore scene that believed metal was more concerned with the occult and other themes which had little to do with real life. As teenagers experiencing the world events around them, it seemed inevitable that it would be infused into their lyrics. NUCLEAR ASSAULT and SUICIDAL TENDENCIES had already displayed punk sensibilities in terms of their music and lyrics. THE REICH were one of the first to employ thrash as a platform for social concerns. Whilst this had much to do with the crossover scene, the music owed more to DARK ANGEL and SLAYER than D.R.I or CRUMBSUCKERS. Time has flown by.

It goes without saying that they receive a vociferous response upon their entrance. The place is absolutely packed to the gills. Not just the old craggy dudes reliving their youth, or the large number of foreign metallers who have been keeping the scene alive, but plenty of new faces also.  Many of whom I had not seen before. Always a refreshing sign. As it is a celebration of the album, ‘Ignorance’ and Administrative Decisions’ kick affairs off. Sound issues affect the set early on with Phil Rind being unable to have himself heard over Greg Hall’s drums and Willey Arnett’s guitar. A few adjustments are required and soon they are back up and going. The anthem of unity ‘One Nation’ and ‘Love…Hate’ then follow. Phil seems to be in good form but not all of his jokes strike the bulls eye. He comes across as being delighted by the turn-out and apologises for the Whelans show where he was extremely ill on the night in question. He then inquiries to how many were at the two previous shows and peoples exploits from last night. Its examination of South African policies may have changed since but it can still be applied in many areas of the world. ‘State of Emergency’ remains powerful to this day. This is followed by ‘Crimes Against Humanity’, further examples of the band’s political and societal stand. 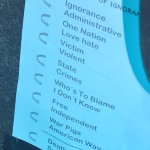 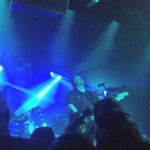 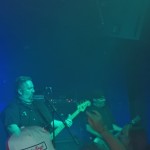 It had started quite lively earlier on in the set but now things begin to get particularly manic. The sole security guard is overworked to throw and dissuade crowd surfers getting on stage, while mosh pits erupt across the floor. ‘Who’s to Blame’ and ‘I Don’t Know’ push things forward before a pair from the divisive ‘Independent’ album. ‘Free’ and ‘Independent’ always go down live well however regardless of how the album is seen these days. A war siren then announces their cover of Black Sabbath’s ‘War Pigs’. It will always get an instant reception from the crowd, no matter where in the world, but personally I feel it would be better served to include more of their own material. “Truth, Justice and the….” leads into a storming rendition of ‘The American Way’. Phil decides to forego the ritual of walking off-stage only to come back on such is the amount of chanting the band’s name. In a return to the birthday album, its opening track ‘Death Squad’ is broken out before the climax of ‘Surf Nicaragua’. The crowd roar their approval, the band express their appreciation and a large Ireland flag with SACRED REICH 30/07/17 written over it is unfurled. The band then return to the stall and a massive surge of fans looking to meet them. The running time of the show was perhaps a disappointment considering that it was just over an hour in length. The band has been accused of having a fairly rigid set list at times and lacking in true surprises. It would have been nice to have seen ‘No Believers’, ‘Sacred Reich’, ‘Draining You of Life’, ‘The Way it is’ or ‘Just Like That’ for instance. Some noted that Phil was off-form afterwards but I can only report on what I saw where he seemed genuinely delighted by the reception. The crowd drifts off into the night air delighted by what they saw and hopeful of the release of a much awaited new album and another visit to our shores.