The revival of a genre after its hey day can allow for plus points and negatives. On one hand, it can allow younger fans, who have probably borrowed their relatives album collection, to be able to have heroes of their own. It can also provide a shot in the arm for a movement that has become stale. As many of the originators have split, moved into other musical styles or become pale imitations of past glories, fresh faces are required to push things forward. Also, many of the newer bands may have taken on different influences and hence allowing for an interesting take on the style. On the other hand, it may be a genre that should just stay dead. Looking at you Nu-Metal. Certain bands who really should have stayed retired decide to give it another go in order to cash in on its new found popularity. Why they never made it big quickly comes apparent. There is also tendencies for some to play up to the more ‘wacky’ side of the genre to the press. Focusing more on the fashion rather than the music.

The thrash explosion exemplified all of this. A new wave of younger bands who perhaps were not old enough to take advantage of its height but took inspiration from it nonetheless. EVILE, SHORT SHARP SHOCK (S.S.S), HAVOK, MUNICIPAL WASTE, VEKTOR, TOXIC HOLOCAUST, BONDED BY BLOOD and SUICIDAL ANGELS all brought us back to the eighties and early nineties with their take on shredding guitar solos, fast percussive beats and high-end vocals. Inevitably as some bands gain in popularity, it sees a spate of followers emerging in their wake. ANIMATOR were one of many Irish outfits that came about around this time. Originally titled HERESY, they changed names in 2009 to avoid confusion with another band. The New Ross/Dublin four piece released their “Open Your Eyes” EP in 2010 and the “Blacklisted” LP in 2013. Both efforts showed a degree of promise, albeit slightly rough and ready. This allowed them noteworthy support slots to AMON AMARTH, NUCLEAR ASSAULT and SODOM along with playing Bloodstock in 2015 through Metal to the Masses. As time has moved on, thrash fans have become more selective with their bands so promise is not going to cut the mustard anymore. The pressure is on therefore. 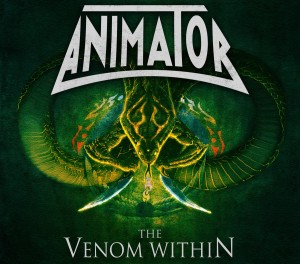 1. No Consequence
2. The Venom Within
3. Sticks and Stones
4. Throwing It Away

And on first hearing opening track to this EP, ‘No Consequences’, it is easy to assume more of the same. Its homage to James Hetfield’s approach to riffing is still present through some tough and meaty offerings. The drums come in well to provide a consistent beat, with a few snares thrown in for good measure. It seems a number focused on the faster pace of thrash with shades of EXODUS, SLAYER and ANNIHILATOR. The vocals are punchy and aggressive with a higher pitch being used on occasions. The backing vocals are primarily call and response around the chorus. So far, so fast. Once we get into it further, more nuances and measured approaches are evident. The tempo decreases while keeping to the same vibe. The drumming from Darren Bradley comes to the fore prior to a breakout guitar solo. This is helped along by some strong bass playing before it reaches an impressive conclusion. Its title number sees a slower and chunkier intro driven along by the drums and bass. It possesses impressive guitar lines with serious weight on them. There are decent tempo changes between the faster and slower sections. The vocals are quite hefty with a feel of crossover/hardcore at stages. There is quantifiable spite to them. The guitar has its moment to shine backed up by the drums.

‘Sticks and Stones’ contains more of a slow and menacing build up with the guitars and drums standing out. The riffs are thick and chunky and a serious amount of groove present. Shades of SUICIDAL TENDENCIES to it. Definitely more emphasis on weight rather than speed. Serious aggression to the vocals with decent screams on display. The lyrics are pretty catchy in the chorus with nods perhaps to detractors. A slowed down section appears, dominated by the drums. The guitars to the background leads into a widdly solo by Ryan Treanor. Impressive mid-level playing towards its finality. The final number, ‘Throwing it Away’, kicks off with a strong and rhythmic bass piece from Barry Ryan. It shows he has the ability to stand apart from the playing, rather than being a background character. More Frank Bello than Tom Araya. There is a discernible air of menace when the drums and guitars show up. There is substantial weight to the playing. The vocals are powerful and emotional. They bring to mind Sean Killian from VIO-LENCE or Mark Osegueda from DEATH ANGEL. The vocals give way to a section of thundering drums and guitars played at breakneck speed. It is custom made for a mosh pit especially with the spit-fire vocals employed. Things are flying along now. The vocals switch to more of a harsher, more extreme version, whilst there are riffs a plenty. Tempo switches back down to a slower, but no less gnarly beast towards the end. 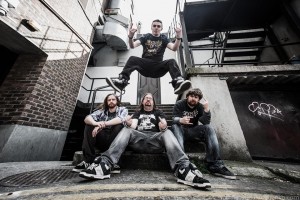 Overall a highly impressive offering. They seem to have refined and concentrated their approach and the sound comes across as being clear and punchy. This is obviously easier to manage over the space of four tracks, but it is at least a sign in the right direction. It would have been easy to have thrown up identical numbers and people would have been happy enough with it. It shows a level of maturity coming into play. There are some tweaks I would have liked to have seen here. A bit more atmospherics at times, perhaps different harmonies and melodies to add another level to the guitars. The real pressure is going to take place when they go back into the studio to record a follow up album. In the meantime, they are set to be busy lads. They recently supported SACRED REICH in Belfast and Dublin, are representing Ireland at Wacken and set to play at Unleashed festival with the likes of PSYKOSIS and The Siege of Limerick. Hopefully, they can build on this and provide more in the future.