The warm hue of Christmas lights was beginning to fade along the cobbled streets of Galway City, leading us into a cold new year. Deep in the heart of the town, a number of musicians gathered from across the country, and indeed across the world, to kick off 2016 at high speeds. In the dimly lit Loft of Seven Bar, the cold was locked firmly outside as CROSSFIRE took to the stage to begin a night long onslaught of thrash metal. 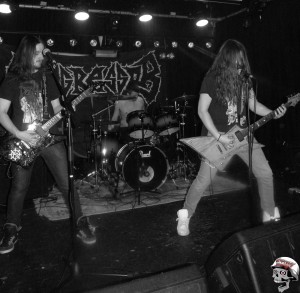 Dublin based four piece, CROSSFIRE , were quick to display their colours as they opened with a heavy rendition of the Terminator theme tune, instantly captivating the crowd and letting them know what kind of band they would be dealing with for the duration of the set. As they launched headlong into their own material it was obvious that their tracks were incredibly well constructed. Strong, well thought out intro sections, featuring some fantastic duelling guitar moments from Matt O’Brien and Kevin O’Connor, acted as a gateway into lightning fast, energetic passages. O’Connor’s short, snappy vocal lines mixed with his high pitched gravelly voice added a vicious bite to every lyric as the band tore through a number of excellently formulated tracks. Although their cover of THIN LIZZY‘s ‘Massacre’ was well received, it was their final original song, ‘The Evil Dead’, which really struck home with the audience. Fast riffs, thundering drums and a catchy chorus, supported by bassist/back-up vocalist Dan O’Connor, worked together to give ‘The Evil Dead’ all the correct ingredients to become a thrash classic.

Following CROSSFIRE’s light hearted take on the genre, Belfast thrashers SCIMITAR arrived, bringing with them a much darker tone. This four piece ensemble played as a contrast to those before them, adding a brutal undertone to the bill. Again, speed was the order of the evening, but SCIMITAR littered their personal blend of thrash with some amazing grooves, coupled with Ryan Aktin’s raw double bass drum work to create an unshakable feeling of force, propelling the music along one chord at a time. Guitarist, John Thompson was perpetually in motion, swinging his instrument and manoeuvring around his fellow band members with reckless abandon while Jonny Gray’s intimidating figure dominated the centre of the stage. The speed behind SCIMITAR’s sound is both satisfying and entertaining; however it is the solidity and execution of the slower breaks that really shows the power of these Belfast beasts. 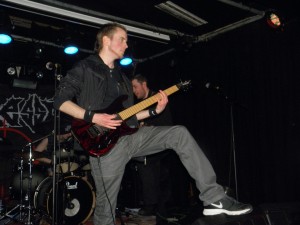 Galway’s own TWISTED WRATH acted as a sucker punch to those in the audience, providing an unusual blend of Thrash mixed with a lot of modern day influences. This young three piece have been making a name for themselves across the metal scene by backing up some of the biggest bands on the thrash circuit; including legendary acts like EXODUS and ANTHRAX. TWISTED WRATH pack a hefty blow with a clear, crisp guitar sound. Although somewhat slower than some of the other acts on the bill, there was no shortage of aggression. Occasionally there was an air of mid-90s METALLICA to their work, while at other times there were hints of TRIVIUM and even RAGE AGAINST THE MACHINE ringing through. Each note is expertly crafted and designed to deliver a number of heavy crowd-swaying segments with melodic vocals and stadium friendly choruses. Guitarist, Colin Dunne’s talent is quite simply undeniable as he spent the majority of his night sprinting across the stage while sweep picking and ripping through blinding solos without ever breaking stride. 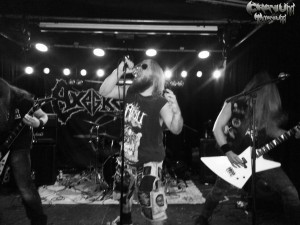 Finland based heavyweights, AXEGRESSOR, took to the stage to deliver the final night’s final aural assault. Fronted by their charismatic lead singer, Johnny Nuclear Winter, AXEGRESSOR started their set as they meant to go on; heard and heavy. Seba Forma’s frantic strumming brought with it a guitar sound so heavy that each chord he struck made the Loft resonate at his command. This was supported beautifully by Aki Paulamaki earth shattering bass sound and Atte Makela’s skull rattling drumming. However, AXEGRESSOR were a lot more than just a sum of their parts, they provided some of the heaviest thrash metal one could ever wish to here. Nuclear Winter’s vocals wouldn’t sound out of place in a death metal act, yet his rough, grainy style still fit in perfectly here. Like SCIMITAR it was the slower breaks in their blisteringly fast tracks that really brought their sound to life. Slow, steady stomps provided the feeling of marching to war, prepared to take on all comers. There was an all consuming darkness to their sound which furthered the feeling of force behind the music. Although this powerful quarter provided an amazing live experience, there were unfortunately one or two minor short comings. The lead guitar sections, although well structured and played with acute precision, were few and far between. Also, while Nuclear Winter’s booming vocals displayed great levels of control, 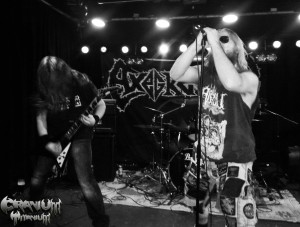 they did seem a little shaky during some of his higher notes. However, this was not enough to take away from their incredible and relentless style of thrash metal. There is still a weighty sense of strength to what AXEGRESSOR have created, which pushed and pulled at the crowd as it saw it. In The Loft, Galway City, it was evident that that feeling of raw power hadn’t faltered one iota during their ten year career. In 2016 the new year was brought in kicking and screaming through in the form of brutal, uncompromising and hugely entertaining thrash metal to chase away those winter blues.