It had been a busy few days for the Dutch five piece, as Galway City was scheduled as the last stop on their Irish mini-tour. Having already laid waste to Dublin and Limerick while promoting their new album, “The Deceived”, DICTATED seemed more confident than ever and were raring to go as they set up their equipment at the Róisín Dubh. There was a certain air about the place that was instantly recognisable, a buzz that couldn’t be shaken off. Everyone in the room knew that they were destined for something great that night, and as the time drew closer to when this Brutal Death Metal band were set to take the stage, that exciting atmosphere thickened with every passing moment. The feeling of anticipation for the show was radiating from guitarists Sonja Schuringa and Yessica Otten, as they sat down to answer a few questions.

To begin I asked the ladies about their visit to the Emerald Isle. Was this their first time playing on Irish soil? 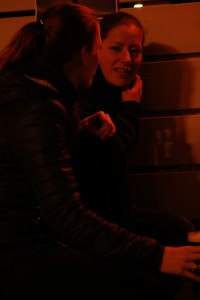 “It was also a holiday” Yessica chimed in, and the pair began to laugh.

“So it’s our first time in Ireland for playing gigs.” Sonja concluded.

Galway was the third date on the band’s journey through the country. They had previously hit Dublin’s Fibber McGees and Dolans of Limerick. How did DICTATED feel about these shows?

“Amazing!” Sonja said almost instantly. A smile spread across her face as she reminisced.

“We totally didn’t expect it.” Yessica agreed with her band partner. “It was very crowded. The people in Ireland are so different than the Dutch crowd.”

Sonja imitated the Dutch crowd by crossing her arms, extending her lower lip and wearing her best frown, as if to pretend she was waiting to be impressed. “.. And ok, that’s fine” she confirmed. “But the people here are screaming and shouting! Especially in Limerick, we didn’t expect the crowd and the crowd didn’t expect us, so that was a double win for both parties.” Schuringa continued “And they were mental! Literally stage diving, crowd surfing and it was chaos absolutely chaos. We love it. It was amazing.”

Although “The Deceived” is DICTATED’s first major label release, the band already have a colourful and interesting history which saw them suffering line-up changes and adjusting their sound. I asked them how they came to be the Brutal Death Metal freight train that they are today. Otten took the reins on this one. 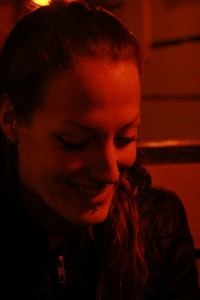 “You want the whole story, because we’re gonna be here for an hour!” Laughs Yessica.

“We started in 2006. Sonja and me are the founders. We’ve been doing shows, and finding members, and members left and came along. At the end of 2012 mostly everybody quit the band and we had to think ‘Are we going to continue with the band, or are we gonna give up? Are we gonna start something completely new?’ And then Henri from GOD DETHRONED came up to us and he pushed us to continue with the band, and we found new members. This is the solid line-up; Sonja, me and York. That’s the core members. We are DICTATED, and for our live shows we have session musicians. So, yeah, that’s the short story!”

When asked how their newest core band member, York Keijzer is fitting in, they are surprised that he can handle their unique personalities.

“(He’s working out) awesome.” Says Yessica, with a simultaneous “Surprising” from Sonja.

“He’s the youngest member of the band.” Schuringa said about their lead singer. “I’d say he’s the most introverted of the three of us. Yessica and I are a handful, we’re very loud, obnoxious and very annoying.”

“He handles us pretty good!” Otten confirmed while laughing at her fellow guitarist’s statements.

DICTATED’s guitarists make a charming and light hearted pair. Their personalities appear to complement each other perfectly, and at times they almost come across as a comedy duo, down to a point where they even share many of the same characteristics. This gives the impression that they’ve known each other their whole lives, perhaps even grew up together. I asked them how they came to be such good friends. 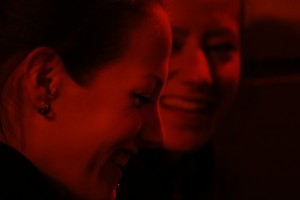 “I think it’s the foundation.” Sonja said explaining the ladies’ history together. “I met Yessica and we didn’t like each other at all. We couldn’t stand each other. One night we had to adjust to each other and I’d say that was ten years ago now. I asked her ‘Hey, do you want to start a band with me?’ and she said no!” Both girls erupted with laughter, thinking back at how different things were when they first crossed paths. “But I was persistent, saying ‘You really have to do this!’ Well that was ten years ago.”

(Yessica) “She and I didn’t play guitar at all, so we learned ourselves, started from scratch, playing together. I think we are inseparable.”

“We hear all the time that we are like sisters or twin sisters, but we’re not.” Sonja came back in, chuckling once again.

“I think it’s the chemistry that works between us, because (Yessica’s) a different guitar player than I am, we have different backgrounds, the style of music that she likes is different from me, which forms the base of the band! And I think if either she or me was to leave the band, DICTATED would be dead. There’s no way either of us are gonna continue with Dictated without each other. We need each other.”

The band’s debut album was released independently, whereas their latest helping, “The Deceived”, saw release on major Metal record label, Metal Blade Records. This illustrates a huge step forward for the band, and indicates a bright and brutal future for the furiously heavy musical outfit. I asked the girls how it felt to share a label with such well-known artists as GWAR, CANNIBAL CORPSE and MERCIFUL FATE. 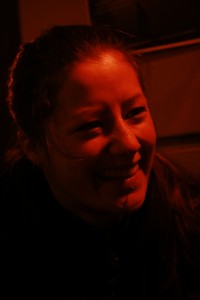 “Eh…” Yessica thought it over for a moment. “Yeah, great! After we’d written ‘The Deceived’, we searched for a record label and we’d just hand out CDs, like old school style with an envelope. We got a couple of responses from a couple of record labels, and Metal Blade offered us the best deal. And of course the name is amazing as well. Yeah, it’s been pretty good. They really take care of us.”

“We are so excited because Metal Blade is a very good record [label] to be on. They take really good care of artists and their bands. We are very, very proud to be on the bill, to be part of that Metal Blade family, and we hope to release another album on Metal Blade as well.”

Throughout their Irish tour, many local bands joined DICTATED’s sonic assault as support slots on the bill, each bringing their own individual style to the table. I asked the ladies of DICTATED if any of the home brewed acts that they’d shared the tour with had left an impression on them.

“Oh, big time!” Sonja said, without missing a beat. “Ooooh, big time! Especially the first night in Dublin. These guys, when we saw them play we felt out of our league. How are we, in God’s name, gonna top this one? So, so amazing. Really, really good.” 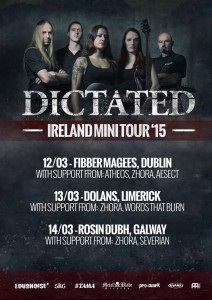 “ATHEOS, I believe; they were amazing!” Otten said, throwing in her two cents from the experience. The girls then began mimicking shredding guitar solos followed the simple plinking of strings to indicate how they felt the Irish acts were somewhat superior. Once again, the ladies’ sense of humour shone through.

With “The Deceived” being backed by Metal Blade since its release last year, how has it been received so far?

“It’s been really good. We released it in August.” Yessica began.

“And, well, that’s a hard period; during the summer, the festivals are playing. ” Sonja said, picking up where her band mate left off. “If you release an album in August, you’re going to miss the boat for doing a lot of cool gigs. But we’ve been getting so much really good interviews, so that’s really good.”

“Yeah!” Otten exclaimed with a look of pride and “People are like, ‘Wow, this is DICTATED!’”

“When Henri from GOD DETHRONED, he said our riffs are pretty good, pretty solid… we only needed to arrange them in the right setting. So we sort of held a pop structure. So if we play the songs people would recognise the chorus and the riffs, and they can sing along, so we see a big different between what we did before to what we do now. Especially to see the people sing the songs with us; that is so cool! We can’t wait to write the next album!”

Dictated’s Irish mini-tour may be finished, but Sonja, Yessica and the others can be caught on the road all over Europe with gigs planned for later this year, including Nijverdal Tattoo Fest in The Netherlands. Their Brutal Death Metal album, “The Deceived” is available now through Metal Blade Records.