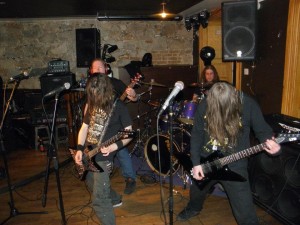 Main support on the tour came from up and coming Industrial-Death-Tech deviants Axial Symmetry.

Once the gig was over, gear loaded up and blood mopped off the stage floor, I had a chat with all four members of Axial Symmetry on a shady corner of Dominick Street outside a sleazy sex store  and quizzed him about their upcoming release and future plans for the band.