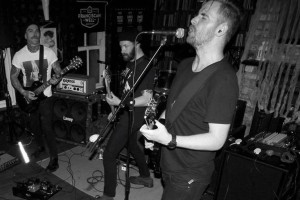 The “Cynosure” EP was digitally released back in December and their brutal intense sounds have been hailed as must a listen earning them spots alongside Belgian Post Hardcore act OATHBREAKER and Icelandic/Irish Black Metal act SLIDHR. DESTRIERS pound out bleak unrelenting dark sounds.

“Cynosure” was produced & mixed by the band in Sun Studios, Dublin in August 2016 & Mastered by Brad Boatright at Audioseiege (Nails, SunnO))), Converge) adorned in artwork by the Polish Surrealist master Zdzislaw Beksinski out on Distro-y Records and Visions of Warning later this year.

Check out what the Archive had to say about “Cynosure” here…
https://www.irishmetalarchive.com/review-destriers-cynosure/