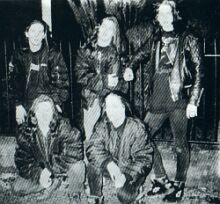 SYNAPSE formed in mid 1991 as a 4-piece and were pretty active in the early 1990’s with their main influences being early SEPULTURA, SLAYER and OBITUARY. They recorded and released their debut 4-track demo ”The Awakening” in 1992 and shortly after decided that a second guitarist was needed to improve their recording and live sound. So Alan Duffy joined the ranks.

It was this line-up that recorded the ”Cries Of The Unborn” demo in Stare Sudios at the end of July 1993. Subject matter of tracks on the demo dealt with varies political and social topics of the time. ‘Afterdark’ and the title track ‘Cries Of The Unborn’ dealing with abortion and giving two different views the subject. The track ‘Cradle’ is about the Irish famine in the 19th century. ‘Secret Tears’ tackled child abuse and ‘Warthorn’ is political propaganda in the Middle-East. Over 8 tracks it was quite a lot to tackle at the time for a demo release.

Band information is pretty sketch on this lot. There’s little or no references to them online other than the same brief repeated over and over. So I’ve tried to ‘fluff’ it up with some added comments made by guitarist Justin Wilson in an interview he did for ‘DEPRIVED ZINE’ back in 1994.

The only recent news on SYNAPSE is that they had the track ‘Afterdark’ feature on the compilation CD ”Aggressive Tyrants – 20 Years Of Irish Metal – Vol.1 [’87-’94]”, released in 2010. The CD is available to buy from the UNDERGROUND MOVEMENT label or from INTO THE VOID in Dublin.

Thanks a million to Alan Duffy and Stuart Halpin for allowing me to upload the demos to the Archive!