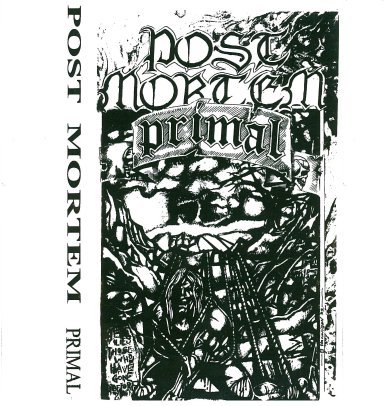 POST MORTEM  were a Death Metal band from Newbridge in Kildare where they played their first gig in March 1992.They recorded their one and only ‘Primal’ demo at Poppyhill Studios, Naas on 21st-23rd August 1992, which was produced and mixed by Willy Hayden and the band. The demo sold well and the band soon began to branch out and played a few gigs in and around the Dublin area sharing the stage with other local bands from the time such as DEVIANT and SLEEPING VILLAGE.

There was also another unreleased recording which contained 2 newer tracks. If Cory ever finds the tape I’ll hopefully be able to get a copy of them to add here. Not too long after the release of this demo the band changed their name to MUCK SAVAGE and opted for a more Alternative style.