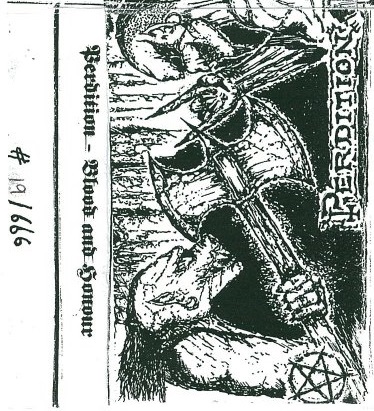 I have to admit! This one caught me off-guard.

I had never heard of the band before the tape had found it’s way into my hands. Then I put it on to listen to it and began looking through the inlay card only to realise who some of the parties involved actually were.PRIMORDIAL’s Alan “Nemtheanga” Averill taking on both vocals and bass with his then recently joined band-mate Simon O’Leary sitting behind the drums and Colin Chandler rounding out the ensemble on guitars.

A quick Google search turned up absolutely nothing. Not even the normally bullet-proof ENCYCLOPAEDIA METALLUM had any reference to the band or the demo tape. So a quick facebook message to one Alan Averill and some light was finally shed on this mythical demo. Apparently only a handful of about 30-40 copies were distributed after its recording. It was recorded and mixed on 27th July 1997 in only 10 hours by ‘Enda’ at Elektra(hell) Studios in Dublin. The logo and cover art was also done by Alan and is included in the download. The demo tracks themselves are very rough and ready. Four tracks ranging from Black/Death Metal to traditional metal, with even a hint of Crusty Punk in there too but that could just be down to the rawness of the recording.

Also! Included on the tape were a number of rehearsal recordings which are quite messy to say the least. But to be fair! Most rehearsal recordings are pretty messy, aren’t they? Although one of them is actually a pretty decent acoustic (probably earlier) version of the ‘Blood And Honour’ track, with just Alan singing and playing guitar. Sorry to say! He wasn’t too keen on these outtakes getting out so I couldn’t include them with the download.