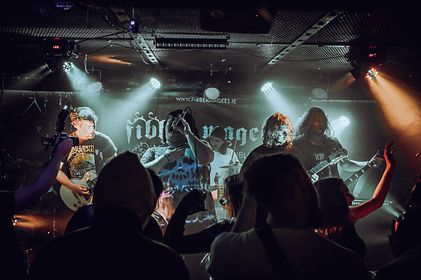 PAIN IN VAIN is a Metal band founded by Mikey O’ Riordan and Jake Black during summer 2014. Based in Ireland’s capital, PAIN IN VAIN take influence from bands such as Bring Me The Horizon, Darkest Hour, Suicide Silence and The Black Dahlia Murder.

In the summer of 2014 at the age of 17, the founder Mikey O’ Riordan was playing in many local bands in the Dublin area. After some trail and error with previous acts, he asked the co-founder and his school friend Jake Black at the age of 16 to play along side him in a new band he was forming called PAIN IN VAIN.

The concept of PAIN IN VAIN was visualised once Mikey parted ways with a previous band called Fearless Falling. Previously a song title in that band, it became the name Mikey and Jake would settle with for the next chapter of their lives. For months they would go on to audition members, until they met with Mark Nolan and Glenn Quinn in late 2015. From this point they would go on to perform their debut show in Belfast, Northern Ireland that year, record and release their debut Leave Me E.P, release their debut music video for Beneath Waves and headline their own E.P Launch show in Fibber Magees which over 150 people attended.

From here PAIN IN VAIN saw a new line up with the addition Bernard Walsh and Kenneth Dignam, joining after the departure of Glenn Quinn and Mark Nolan. Since then they have released their follow up music video for Faceless God, traveled further afield, supported metalcore act Follow My Lead and released their single Eye For An Eye. In Oct. 2017 following the release of their single they performed their first high profile show, headlining The Academy 2. Over 150 people attended, being perhaps their biggest headline show to date. As of Feb. 2018 the band announced they will be writing and recording their debut L.P and anticipate to release by the end of the year. What lies from here for the band is a very promising future indeed.