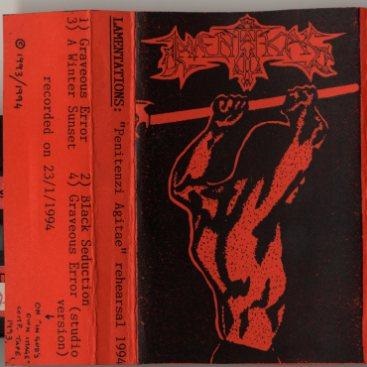 LAMENTATIONS were short-lived Death Metal band from Waterford that formed in 1993. They released a few promo tapes, all listed below. And played a number if local venues. Even sharing the stage with PRIMORDIAL, FIFTH DOMINION and CURSED EARTH in Nancy Spain’s, Cork when they played their first ever live gig. A sound desk recording of this gig is available at the download link provided below.

They also had their track, ‘Graveous Error (studio version)’, feature on the “In God’s Own Image Vol.1” Irish compilation tape.

LAMENTATIONS first gig, recorded from the sound desk at Nancy Spains in Cork on 05-02-94, supporting PRIMORDIAL, FIFTH DOMINION and CURSED EARTH. There are actually 2 versions of this on the download. The warts’n’all straight live recording with between song banter which includes, as Peter Holzmann describes it, a “brutalized” UNLEASHED cover version. And an edited version by Peter, which he “cut all the banter and chopped out the UNLEASHED cover because it was a total trainwreck. And all my fault I may add – I forgot how the song went about half-way through”.

Supposedly there was also video footage that was shot at the gig in Nancy’s. There was also another gig recorded in a bar called Jerry’s on Barrack Street in Waterford which took place in late ’94 or early ’95. Apparently the sound quality was much better than on anything the band had done hitherto and they also did two different cover versions, ‘Midnight Mountain’ by CATHEDRAL and ‘Disembowel’ by AUTOPSY.

“Darragh O’Laoghraire (Invictus Productions) was our doorman that night” – Peter.

So if anyone has any of these buried away in their Ma’s attic or thrown in the back of your wardrobe at home, please come forward. You’ll be rewarded in skittles and fizzy drinks!