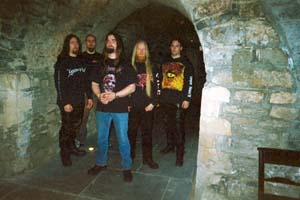 “Info and write based in band bios from Myspace and Bebo…”

INHUMANE formed in September 1996, originally with the intention of playing a one off gig as part of the line-up for Cliff Burton’s tenth anniversary. However, after several practice sessions playing covers, they began writing original material. They played their first live date supporting SHOT AT BIRTH and DEADLOCK in Slattery’s (Capel st. Dublin) and afterwards were approached to submit two original tracks on a compilation CD. The line-up included Keith Whelan and Michael Glover on Lead and Rhythm Guitar, Andy Inight (NEPHRIDIUM) on drums, Ronan Murphy on vocals and Ken Murphy on bass. ‘The Devil and I’ and ‘All Alone’ were recorded in Trackmix recording studio (Clonsilla, Dublin) and ‘The first Irish Heavy Metal Compilation’ was released by Panic Records in 1997.

After gigging extensively and having undergone nearly a complete line-up change INHUMANE entered Cosmic Recording Studio (Dublin) to record ‘Speak’ which appeared on another double compilation CD ‘In Unison’ (Sentinel Rec) in 2000. John Edmonds was bands vocalist at this point and Kingsley Renehen (IN MEMORY OF…, SYPHOR, SACRUM OF ELEGY) was on bass. Keith Whelan was also the bands sole guitarist for this recording.

The writing process had slowed down at this stage after yet more line-up changes, with Eoin Raftery joining the line-up on bass. But after dropping several songs and taking a new song writing direction they again went into Cosmic Recording Studio to begin recording six tracks for a new EP. Having played several live dates with just one guitarist it was clear that a second guitarist was needed. After the arrival of Aaron Murphy (KINGDOM) the line-up was complete and the recording process could continue which resulted in the ‘Fetish for Flesh’ EP.

Numerous gigs followed in support of ‘Fetish for Flesh’ including a support slot with Dutch deathsters GOD DETHRONED. Things progressed over the following months with more live appearances and writing for our next release. Then in the summer of 2004 the band faced their biggest obstacle. John and Andy were involved in a motorbike accident. John came out the worst and it will be mid 2006 before he can make a full return to the band. Things continued slowly for the next few months with very little activity. In January 2005 Anthony Weston (RESIDUAL EFFECT) replaced Andy behind the kit and a 2-track promo was recorded and was released in January 2006.

The band never actually split-up and Keith has mentioned that there may still be a breath of life left in the band. If there are any further developments, I’ll be sure to post an update.