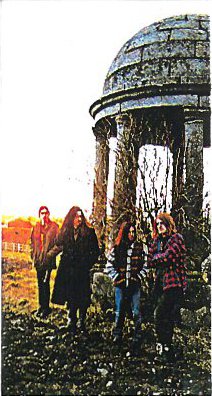 The band was started in 1992 by Barry Whyte (Guitar/Vocals), Dean Whyte (Bass), a Stuart Nolan (Drums/Vocals). After practicing for a couple of months they played their first gig sometime in October with same other bands from the area including Barry’s previous band LAST BREATH. The set consisted mainly of covers from SLAYER, SEPULTURA & NAPALM DEATH and one original track, ‘Nemesis’, as the band hadn’t yet completed the other originals they were working on at the time.

In the first few months of ’93 Stuart left the band and was replaced by Bryan O’Connell. Around the same time Martin “Sunny” Owens joined on second guitar. They proceeded to work on original material with this new line up and got tighter through playing numerous gigs. On having a sufficient amount of originals ready they decided to record their stuff properly in studio. The sessions for ‘The Garden of Earthly Delights’ were started over a couple of days in December 1993 at Nine Stone Studios in Bagenalstown, Co. Carlow, and concluded in January 1994.

The band continued to gig as frequently as possible and also worked on more of their own material. Their next and last recording, “Out With A Bang” was done in a lo-fi manner on a home 4-Track recorder in February 1995 with a three piece line up as Sunny had left the band a few months prior to this. It featured a much more stripped down sound which complimented the direct and straight-forward nature of the newer songs.

Unfortunately! The band fizzled out over the next year as it lost its original momentum as the inevitable arguments and disagreements ensued.

There’s an early ANATHEMA feel to a lot of the music on the demo. Especially on some of the lead guitar work which is reminiscent of Danny Cavanagh’s formative years. In fact the guitar leads and main solos are well above average for an Irish demo from the period. ‘Devoid’ is a good example, as is ‘Emotion’ which also uses a short spoken passage to good melancholic effect. There’s also a BLACK SABBATH type Sludge/Doom influence that comes through in parts. ‘Nemesis’ with it’s lead heavy, low-end bass intro and the main riff and solos on ‘Frozen Art’. They weren’t afraid to speed things up either. Although! To be honest the quicker sections come across more like Thrash than Death Metal. And for the most part the vocals are of a Thrash/Hardcore style which does suit the faster parts, but can sound a bit odd over the more Doom oriented parts. And it’s the Doom element which is where the real appeal to DWELLER is to be found.