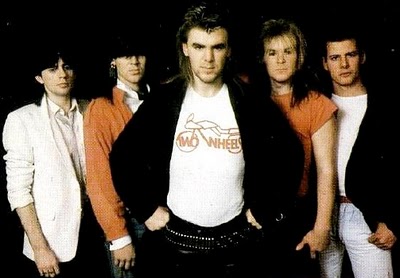 They recorded a demo tape sometime during 1983/84 which was recorded at Eddie Donovan Studio in Kildare Town. And in 1984 recorded two tracks for their vinyl debut on the 1985 ‘Green Metal : New Irish Heavy Metal Comp-LP’, released by Crashed Records and Metal Masters, with the tracks ‘Out Of Control’ and ‘Metal Mania’. They were chosen from the bands featured on the compilation to record an album for Crashed with the UK release being handled by Metal Masters. They released their ‘Out Of Control’ LP in 1986. The album is pretty typical sounding stuff for the time. Nothing spectacular, but not too bad either. The brilliant cover art deserves a special mention, though!Definitely a contender for best Irish album cover, EVER…!!!

Dec James contacted me recently and told me that there were two more ‘live’ albums live recorded… ‘The Last Stand’ at various venues around Irelelnd during 1987 and 1988, and ‘A World Wide Cellar’  recorded during the bands UK tour again around 1987/88. Unfortunately! All the masters and remaining copies were totally destroyed in a storeroom fire years back along with a horde of other recording masters, vinyl, cassettes and memorabilia. He hopes to re-record some or all of the tracks again, but only time will tell. He also mentioned that Crashed are planning on releasing the ‘Out Of Control’ album on iTunes. And also that he hopes to get it re-released on CD too.

As of June 2013, ‘Out Of Control’ has finally been released on CD through Irish label Slaney Records.
And August 2020 saw the “The Last Stand” getting a proper release and upgrade, using a combination of old demo tape recordings and new re-recordings. It has been released digitally on Spotify, Youtube and other digital platforms.