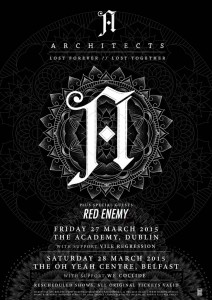 Brighton, UK’s ARCHITECTS, who are currently on tour in Europe with EVERY TIME I DIE, BLESS THE FALL and COUNTERPARTS, have just announced that they will play their re-scheduled Dublin show at The Academy on Friday the 27th March 2015. Also added to the bill are two of Dublin’s best and brightest metal acts, with hardcore/metalcore outfit RED ENEMY playing as special guests and added support from progressive metallers VILE REGRESSION.

The band will also be playing at the Oh Yeah Centre in Belfast the following night, Saturday the 28th March 2015. Again with RED ENEMY and added support for this show coming from Belfast’s alternative metal band WE COLLIDE. 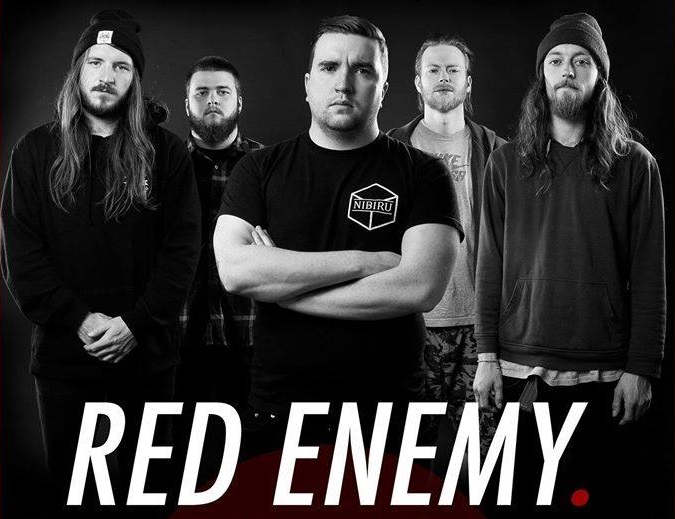 Special guests: RED ENEMY
I guess there never really is one factor that defines any bands success, but for Dublin, Ireland based metal band RED ENEMY, growing up and honing their craft in their humble Irish surroundings, patience has certainly been a virtue. Formed under the apt name STEELLINED in their early teens by drummer Daniel Lang, guitarist Conor Dockery and now vocalist Kevin Letford, they dreamed of following in the footsteps of their peers.

Having penned a deal with highly regarded Californian metal label Mediaskare Records in late 2013, RED ENEMY released their debut self titled album in late 2014 to critical acclaim. The band recorded their debut with producer Taylor Voeltz during a two month stint in L.A which also saw them embark on their first US tour. RED ENEMY plan to spend the rest of 2015 touring. 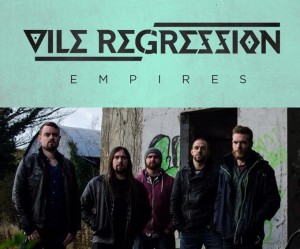 Dublin – Support from: VILE REGRESSION
VILE REGRESSION are a progressive metal band from Dublin, Ireland. The band was formed in 2007 by brothers Barry and Kenn Christie. After a number of demos under various names, the band settled upon the name VISITOR-Q and released its first EP in January of 2009 to positive reviews.

After a lineup change in 2013, guitarist Brian Brady and vocalist Padraig Croke joined the band to complete the current lineup. Coming off a support slot with renowned metal band UNEARTH, the band entered the studio once again to record its latest release “Empires” which was released in July of 2014. 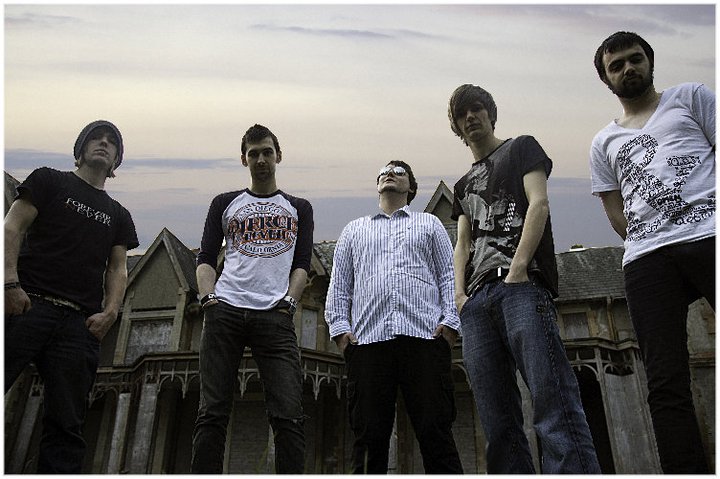 Belfast – Support from: WE COLLIDE
WE COLLIDE are an alternative metal band based in Belfast, UK. Formed in 2011, they have have been regulars on the Belfast live scene ever since. The band strive for a huge sound, combining intense hardcore/metal elements with hair-raising melodic sections.

With a self titled EP and 2013’s single “Peacekeeper” (both available for free) under their belt WE COLLIDE will be entering the studio again in the near future with new material in the works as well as continuing to build a name for themselves as a highly energetic and entertaining live act.

Tickets available from usual outlets nationwide and online at Ticketmaster.ie – From €19 inclusive of booking fee charges.
All tickets will be valid for the new dates: refunds available from point of purchase
This show is +14s