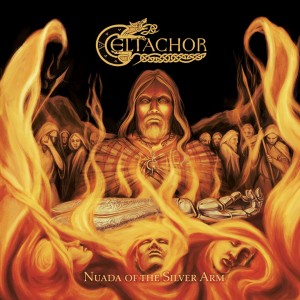 Pagan/Folk Metal band CELTACHOR will be releasing their anticipated new album titled, “Nuada of the Silver Arm” on the 24th April 2015. The album will be CELTACHOR‘s second full length and their first through German label Trollzorn Records. Artwork for the album is by the bands drummer Anaïs Chareyre.

“The concept for the second album deals with the Life and Death of the High King Nuada, the arrival of the Tuatha Dé Danann to Ireland and the first and second battles of Magh Tuiread.The artwork was once again painted by the band’s drummer Anais Chareyre, it depicts Nuada, the king, and his people staring into the Fires of Teamhair at the creation of the Silver Arm, near his great hall at Tara. In the flame’s the faces of Fódhla, Banba and Ériu looking over the creation of the arm. The Kingship returning to Nuada.”

CELTACHOR, along with CORR MHÓNA, will be supporting Latvian band SKYFORGER for their upcoming show in Dublin on the 1st May 2015. And they will also be joining Dutch Pagan Metallers HEIDEVOLK the following day (2nd May) at the Luxor in Arnhem, The Netherlands. CELTACHOR‘s guitarist Fionn Staffort will be unable to accompany the band for both these shows due to finishing his music exams, but a more than suitable temporary replacement has been enlisted, with DARKEST ERA axeman Ade Mulgrew stepping in to lend a hand.