For your viewing and listening pleasure, the IRISH METAL ARCHIVE is pleased to bring the premiere for the new music video from Dublin based experimental.prog metallers SVET KANT.

“A Gaze Indifferent To Your Suffering” talks about the lack of empathy and selfishness. It expresses how we become indifferent to grief and misery and it becomes something ordinary when it shouldn’t. The lyrics dwell in both indifference as individuals, towards other individuals, and as a species.

The song draws heavy on syncopated rhythms that coordinate kick drums, vocals, and bass lines. The drum work is committed and at a very high standard, with evocative sections intertwining blast beats and heavy double kick drums. The video was directed by Jeff Doyle from Crooked Gentlemen and shot as a raw representation of what a live performance of SVET KANT would be.

SVET KANT began as a side project lead by Santiago Kodela while playing in the Argantinian thrash metal band MALICIA. The name SVET KANT is the Slovenian translation for “Holy failure”. The message behind this is that without failure there is no learning, and without learning there is no inner growth. Originally the band was to be called ANTHROPOPHOBIA, but due to the fact that this name had already been used, it was decided, since being half Slovenian, to look for a name and translate in order to narrow the possibilities of using a name that had already been used. 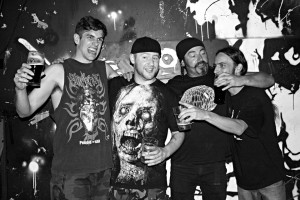 In April-2013 Santiago left Argentina and re-based in Dublin, Ireland and released SVET KANT‘s first full-length album “Loneliness”. After moving from Buenos Aires to Dublin, Kodela started looking for musicians able to fit SVET KANT, and with the passion that the music deserves. SVET KANT‘s first official new member was Liam Roy, who joined Kodela in the pursuit of the remaining members to complete the line-up. The band eventually came across the experience and maturity of a new bass player, Noface blackghostknifefishcreepshow “yup!” (DREAMCREEPER, THE INITIATORS, XEROSUN, PADLOCK, TEN EYES BLAZING, ALLIGATOR). Daragh Kenny (KEVIN ON A BIKE, McGALLIGOG, MORALITY, HORRENDA) also joined the band as a permanent drummer, having started as a session drummer originally and has been gigging with the band from August 2015.

Through a quest of experimenting and defying the boundaries of the metal genre, SVET KANT re-designs both harmony and rhythm while defining a unique and un-missable personal sound. New sonic landscapes and tantalising harmonic textures are explored with the soon to be released second full album “The Visage Unbiased” due in 2018. “The Visage Unbiased” sees Svet Kant working for the first time with Ireland’s top metal producer Michael Richards (Dead Label, Cruachan) at Trackmix Studio on tracking and mixing; with final mastering at New York’s Sterling Sound by the hand of legendary engineer Ted Jensen (DEFTONES, PANTERA, ALICE IN CHAINS, GOJIRA).

The vocal coaching by Judith Mok (Eddie Vedder, Thom Yorke, Mick Jagger) and a guest appearance by soprano Rebecca Rodgers (Northern Ireland Opera) bring a unique and forward-thinking touch the overall album, completely departing from the paradigms and rules of the metal genre.