And so the march towards Cork’s URBAN ASSAULT FEST on Saturday the 25th February continues. And we here at the Irish Metal Archive continue also with our rundown of  bands playing on the day to give all you fine people a heads up on what to expect. Next on the hitlist we have very special guests on the day, CHRIST AGONY, who will be making their way across Europe to deliver their three-pronged Polish assault…

– Where are are you from and what are your backgrounds? 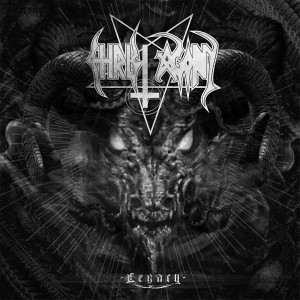 “We are CHRIST AGONY from Poland but each of us lives in another city. Cezar (also MOON, TOPIELICA) Reyash (aslo WITCHMASTER, PROFANUM, SUPREME LORD, ex-VADER) and Darek (also DESSENTER, FAM)”

Originally formed in Morąg, Polandformed in 1990. CHRIST AGONY was the brainchild of enigmatic, ever present leader Cezar (vocals/guitar). Emerging in the early ‘90’s with the “Unholy Union” LP, Cezar’s evil crew quickly proved as daringly inventive as they were conceptually shocking, issuing a string of L.P.’s (including 1994’s “Daemononseth: Act II” and 1995’s “Moonlight: Act III”) which gradually evolved from viciously inaccessible to increasingly sophisticated, culminating in 1996’s surprisingly melancholy departure “Darkside”. Following a European tour with fellow Polish favourites BEHEMOTH, Cezar committed some time to his side project MOON before resuming his work with CHRIST AGONY for a couple of more aggressive, back to basic albums in 1998’s “Trilogy” and 1999’s “Elysium”.In 2003, as a result of conflict with the former publisher Cezar was forced to renamed the band UNION and released only one album, “Christ Agony” in 2005. By 2007 the band issues were resolved and CHRIST AGONY came back to life. And a steady stream of releases have followed… “Demonology” 2007, “Condemnation” 2008, “NocturN” 2011 and most recently the 2015 “Black Blood”vEP and this years “Legacy” LP.

– How long have you been active and what are your accomplishments to date?

The band has survived for over 25 years with a serious back catalogue of material in their arsenal.

“CHRIST AGONY was founded by Cezar in 1990. We have the account of ten full-lenght albums, some demos, EP’s and compilation albums”

– What are you’re influences?

– Is their anyone on Urban Assault you’re looking forward to?

“We are looking forward to see all the bands as we don’t really know their music.”

– What can we expect from your show?

“Dark Ritual at its best!”

– Who would you kill to play/tour with?