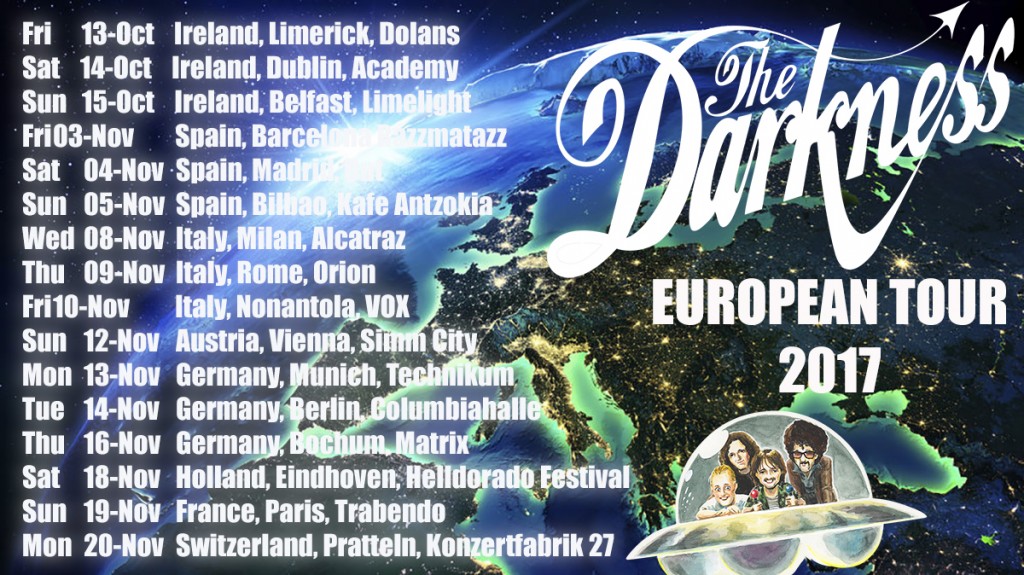 UK retro-glam rock heroes, THE DARKNESS have announced dates for their upcoming 2017 EU tour, including three Irish dates on the 13th, 14th and 15th October at Dolan’s Warehouse in Limerick, The Academy in Dublin The Limelight in Belfast, respectively!

“The Darkness do not care for Brexit. In a robust stand against the isolationist policies of anti-music politicos, we insist that British Glam Rock will continue to be traded with our European friends! To this end we have instructed our minions to organise a simply stupendous music tour, in the varied lands of the Europe. Rejoice Euro people, we will not let you be starved of relentless rifferama, effortless hâute couture, loud noises, and things that flash both on and off. We will bring The Darkness to The Europe! And you, my friends, will be glad all over.”  –  Justin Hawkins

Tickets for The Darkness go on sale TODAY (Monday, May 22nd) and are priced from €25.00 to €30.00 (inc booking fee) from Dolans.ie, Ticketmaster outlets and Sound Celler. 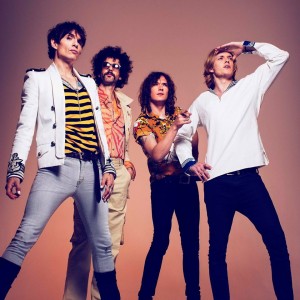 Always an excellent live spectacle, the glam rock quartet and Lowestoft’s prodigal sons The Darkness have lined up a humungous tour.

Singer and master orator Justin Hawkins said: “The Darkness is proud to return once again to the stages of our sceptered isle. We are here to confirm our reputation as the mightiest live band treading the boards in this saccharine age of music made by computers, millionaires and halfwits. Sometimes by all three! We will once again be showcasing our trademark mix of relentless rifferama, effortless haute couture, ridiculously loud noises and bright things that flash on and off.”

“As any fool will tell you, a Darkness show is a place where believers come together, where fluids are shared, and dreams are built. But most importantly, where rock and roll is crowned king EVERY NIGHT!”

“And as if that wasn’t enough, we have made a frankly stunning fifth album that will be unleashed on the world in September of this year by the lovely Cooking Vinyl people. Good times… so come one, come all!!”

The tour will commence roughly one month after the scheduled release date for the bands upcoming new album. Vocalist/guitarist Justin Hawkin commented on the new album…
“Brooding, magnificent. Like the mighty mother condor, sitting atop her rock egg in a nest of curly hair on the side of a powerful mountain. Now, as we all know, great news comes in twos – so rejoice children of the world, because the rock-egg is soon to hatch! In September of this annus rockabilis, and with the help of those excellent people at Cooking Vinyl, we will issue forth a fifth LP record album for your delectation.”

The album, as yet untitled, is available in a wide variety of options including deluxe editions of vinyl and CD, test pressings, and even cassette. U.K. fans who pre-order will also gain access to premium concert tickets for their fall 2017 tour. The lineup remains singer/guitarist Justin Hawkins, guitarist Dan Hawkins, bassist Frankie Poullain and drummer Rufus Taylor, son of Queen drummer Roger Taylor.

THE DARKNESS first exploded onto the international music scene with their landmark debut, Permission to Land back in 2003. Their most recent LP, “Last of Our Kind” was issued in 2015 and reached No. 1 on the U.K. Rock chart, and No. 2 on the U.S. Hard Rock chart.