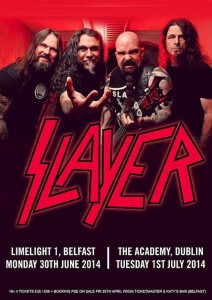 The one and only Slayer have announced they will be returning to our fair shores for THREE (count ’em) shows this Summer. Two night in the Limelight, Belfast on the 29th and 30th of June and also the Academy in Dublin on the 1st July.

Given the reception the band got here less than a year ago, it goes without saying that these will be cracking gigs indeed.

Tickets are on sale now from ticketmaster.ie and Ticketmaster Outlets Nationwide.
A limited allocation of tickets will be available to buy from Katys Bar, Ormeau Avenue, Belfast.

To whet your appetites the band has also aired a brand new track titled ‘Implode’ which is the first taste of what the band have in store for their next, as yet, untitled album. Their first since the death of the legendary Jeff Hanneman.