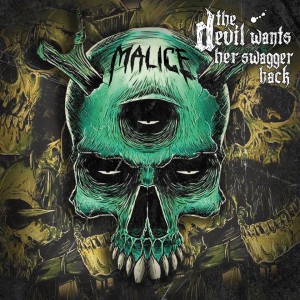 About 1 year ago I was talking to TDWHSB guitarist Mick Hynes in Meath and he was telling me that the band have roughly 20 songs and they are gonna cut it down to find the best few for this E.P . And well fair fucks to the lads, outstanding ! After THE DEVIL WANTS HER SWAGGER BACK exploded onto the scene with “Sign Here”, their debut E.P we all knew we were in for something special and different to fill the void genre wise that Ireland was missing. A great EP but it was clearly just a taste for what was due to come next.

‘The devils Whisper’ is a soft piano intro which gives you a false sense of security for the intensity and heft which you are in store for. Although saying that, it fits very nicely into the mix and has a great atmosphere to it. Without warning we are welcomed by thunderous double bass followed by hate filled screams to welcome us to the fury that is this EP’s lead track ‘Casualties’. This song feels like it was the track missing from the grey chapter, such is the intense presence of SLIPKNOT inspired riffs but with the Devils own twist on it.

‘Off The Wall’ introduces a slightly new dynamic with TDWHSB that I haven’t seen in their previous stuff. It seems to start off as a metalcore style song ( stay with me , it gets better ) , but explodes into very death metal style heaviness that just leaves you scratching your head as to how this progression was even possible. “2.0thless” pays homage to Toothless from the bands first E.P which is personally my favorite track from them…..until now !! I didn’t think Toothless could be improved but the guys have definitely taken this belter to the next level , the only criticism I would have is that a section in the first 2 minutes of the song is quite simaler to a section in My Plague from Slipknot , however this may have been intentional as tribute to their heroes , still sounds amazing though ! 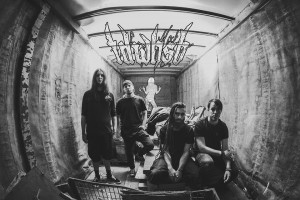 ‘Wannabe Deity’ brings back the old school nu metal sound which a lot of bands cannot achieve these days without djenting it up , the lads did a grand ole job here , especially with the old school turntable sound. A decent track although it did feel like it was missing something. ‘Savages 1: Survival Of The Fittest’ was definitely the perfect choice for the final song , both on this record and also live as its very heavy hitting but also very unpredictable , its very hard to tell when and what the next riff is going to be which adds a level of intensity on its own and also keeps your attention till the very end.

Overall! There’s a very heavy SLIPKNOT and KORN influence throughout, which is great because we really don’t have this in Ireland and we can definitely do with a lot more of it ! And TDWHSB are the closest thing we have to SLIPKNOT and that’s an absolute godsend !! Stellar EP , Cant wait to hear this shit live!!

“Malice” is Due to be released on the 1st of October 2016 on Spotify , Youtube, Bandcamp and Itunes , be sure to catch the launch gigs at the following dates and venues!

Until the then here’s a music video for the lead track ‘Casualties’.