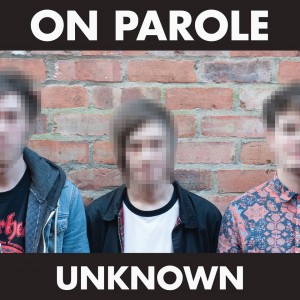 I had originally pegged ON PAROLE as a MOTORHEAD style band, given the fact that they pinched their name from said bands original monicker. I couldn’t have been more wrong. Only going a few short years, ON PAROLE are a young Belfast rock band who sound like they’ve been doing their thing for a lot longer. Two release down and the progression being shown is notable. Their debut “Rock ‘N’ Roll” EP was a competent release with catchy tunes, but still came across as just being a bit thrown together. But it’s their latest “Unknown” EP that has made this listener sit up and take notice.

Opening with the title track ‘Unknown’, the band hit the ground at top speed with a quick-fire riff. Then the main verse and chorus riffs are more simple, but confident and carries through the majority of the track. And the bass tone throughout is heavy and thick sounding. ‘Lester’ follows with it’s heavy groove, catchy chorus and a clever spoken mid-section with a nice and quick guitar solo. ‘Dead Man’s Train’ is a blues inspired chugger that rolls along at high speed. Switching gears every once in a while. An alright track in itself, but a little disjointed and drags on longer than it needs to.

‘Shotgun Romance’ is another pacey number much like the first two tracks. Just as you think it’s about to end the band veer off into a solo and carry on for another two minutes. The point had been made and they could have easily just kept it shorter and sweeter. Closing number ‘A Siren’s Tide’ is the longest track from on this EP. Initially it comes across as being a slightly more diverse offering compared to the previous lot. But after repeated listens it’s basically just three variations of the same song. Again! It’s another disjointed type of track but it kinda works for the most part. Sam Davidson vocals are solid throughout, but his mellower side really shines on this final track. And his lead guitar bursts are well placed and bring MANIC STREET PREACHERS to mind, adding a nice touch. Especially on the closing piece.

ON PAROLE have a lot going for them. And given the right breaks could do well for themselves. But I do feel they unnecessarily drag things out a bit too much. It’s still early days for them, though! And it will be interesting to see where they go after this EP.