The loss of a powerful character in a band, be it a front-man or otherwise, can mark a crisis point for many outfits. They are often the face of the band in the eyes of the fans or the general public. Even if they were not the main song-writer, the force of nature and presence they provide, can often put others in the shade. After all, there are not many that share such traits knocking around. AC/DC recovered from the death of Bon Scott to incredible heights with Brian Johnson. PINK FLOYD similarly dusted themselves off in the aftermath of Syd Barrett’s emotional collapse to become the behemoth that they are/were. For many IRON MAIDEN fans, Bruce Dickinson is the only guy that they would contemplate out front. However the latter band also provides one of many cautionary tales. The affable Blaze Bayley was unable to be the larger than life persona required for the job. Their colleagues in JUDAS PRIEST experienced a similar feeling when Tim ‘Ripper’ Owens replaced Rob Halford. You may have the voice but the strength of will may be lacking.

Kildare based metal outfit OLD SEASON had a dilemma to face when MOURNING BELOVETH came calling for their lead singer in 2010. For many fans, Frank Brennan and OLD SEASON were indelibly linked to one another. It was a move that surprised a few but it was not a decision he could really turn down. MOURNING BELOVETH demand a higher profile and tour regularly across Europe. The band faced a crossroads. To continue with another face or to quietly go their disparate ways. It hence came as a pleasing surprise when it was announced that following an extensive search, and numerous auditions, that a replacement had been found. It was important this process was not rushed or conducted hastily. The mix between vocal style and character had to be right to allow him to integrate seamlessly into the band. Obviously any length of time away, may see a band slip out the consciousness. A series of live dates, including a blistering appearance at Siege of Limerick in 2015. They were also busily writing away, developing material which compromises this album here.

Opener, ‘A New Dawn’, sets off with a synth led piece. This seems almost cinematic in its scope and testament to the work of Dermod Smyth with its booming brass and orchestral feel. This is punctuated by a few isolated drum beats. The drumming becomes gradually tighter and with more discernible patterns. This is added to by the guitars which manage to hold to the same flow as the introduction. The vocals make themselves known and it is interesting to note their tone. Definitely more on the melodic side of affairs, and a hint of power metal to them. John Bonham, he of a famous name, is able to display an impressive range from lower tones to some decent screams. There is good combination between the two guitarists, along with a few tasty solos to boot. The drumming builds up an impressive beat throughout. ‘Scavenger’ steps up the pace and displays more of a N.W.O.B.H.M vibe to it. That is not to say it is being deliberately retro for the sake of it. Plenty of bands from Canada and Sweden have breathed fresh life into this. It is a guitar/drums led track from the very beginning. The riffs in particular, are particularly catchy and this leads into a soaring set of vocals from Bonham. It is very much a chorus driven piece with some really infectious leads on display. Definitely made for the live arena. ‘Chosen’ changes tack with a distinctly slower and heavier intro. The guitars are thicker, the keys are slower and the drums carry a noticeable thud. It is the song which is most recognisably OLD SEASON. An almost doomy CANDLEMASS-like feel with a palpable sense of menace. A great power and sense of gravitas to the vocals with a hint of Greg Lake era KING CRIMSON at times. This is laid down over solid drumming, plonking piano and a powerful solo.

‘Elegy’ re-visits the symphonic atmosphere from the opening track. Dramatic and emotive in equal measures. For a point of measure, look at ‘Night of the Demon’ by Demon. Sturdy drum beats from Anthony Walsh are laid down over a sorrowful and yearning set of vocals. The playing involved is a clear example of their music writing capabilities. They manage to maintain the same melodic sense upon which they built their name on. Events slow right down to allow for a powerful guitar solo to shine through. The melodic feel is maintained in ‘The Journeymen’ with its melancholic piano led opener. This builds up to introduce the drums and a few guitar licks are peeled of for good measure. The drums gather speed, whilst maintaining the same sense of rhythm. It seems to be the tale of an outlaw who has accepted his life’s mistakes and seeking redemption for them. There is a great combination yet again from Jimmy Blanchfield and Kiernan. Serious pace and power is built up with a couple of sweeps being thrown in. There is also an interesting contrast in some of the vocal styles employed with a whispered piece and more harsher vocals elsewhere. Another organ led piece crops up in the guise of ‘Rivers of Cepha’. Symth really gives it a sense of grandeur. It comes across as being akin to a symphonic black metal piece when added to the high pitch wails being used. Events settle back down but maintain an air of darkness. Bonham keeps up a mood of spite by sarcastically laughing. The playing is thick and chunky before leading into a quickening spiral.

‘Words From Beyond’ sees yet another symphonic lead intro. A delightful combination brings all the main players together before a wrought and powerful guitar solo. A few sweeps are included again. There is serious weight given to the drums and Dave Copley’s bass work. Bonham’s vocals are gloriously overwrought and demanding of your attention. It reminds one of the classic lead singers of the genre such as Dio and David Byron of URIAH HEEP. ‘The Void’ is suitably moody and atmospheric. It gains in tempo before slowly before kicking into a piece with considerable weight and pace. It almost comes across as being a proto-thrash number. Definite nods to their NWOBHM influences. This gradually slows to a bass and drums driven section towards the end. It reaches a fittingly epic and dramatic closer with ‘Nevermore’. At nine minutes, it is definitely the longest track on offer here, but keeps the listener’s attention up throughout. The lyrics are excellent and performed with astonishing tight energy by the band. Riffs and leads, rhythm and groove all unite to produce a quality piece of heavy metal. As they have shared the stage with bands such as LORD VICAR, SOLSTICE, ATLANTEAN KODEX and others of that size, it is clear they are aiming for a bigger scale. 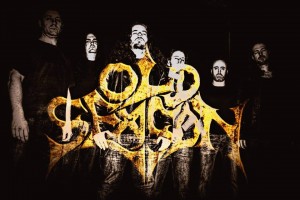 I thoroughly enjoyed this album. They have been able to take on influences from the past and create something that is fresh sounding and new. They are also able to sample a number of differing styles, be it doom, power metal, traditional metal or thrash. Their power metal stance is more on the ICED EARTH side of matters than EDGUY thankfully. Different elements do not outstay their welcome either. A step is taken into one genre without falling straight into it. It was great news to hear they were deciding to continue on and this album proves them right. Unfortunately so far their recorded output has been fairly limited in comparison to their musical lifetime. Hopefully this will allow them to reach new territories and produce more work.