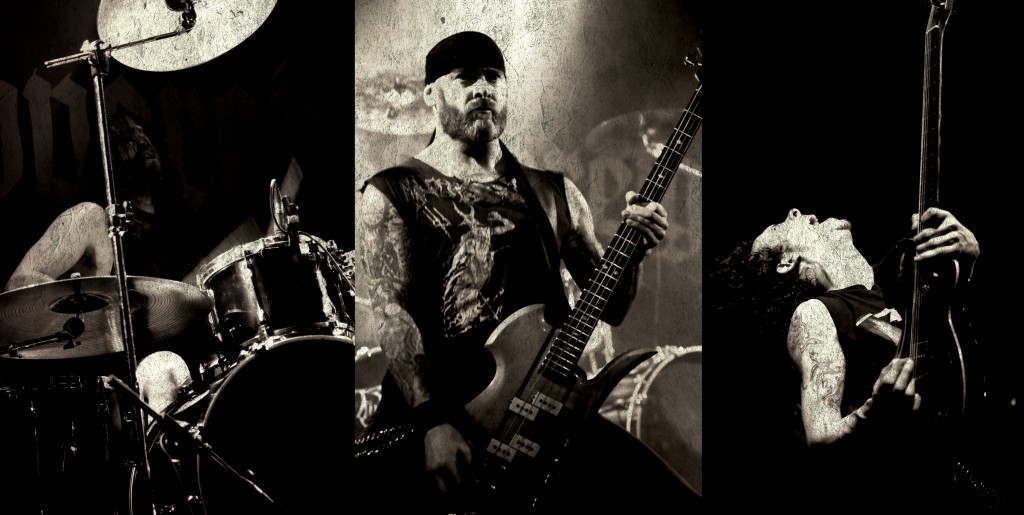 What defines a side-project can often be somewhat confused. It is usually the premise of a a member from an established band seeking to explore a different path or work with individuals outside of their current one. It may be that a period of down-time has arisen between recordings and touring with their day job. Often the party may have ideas that were considered not to match the band they are in at the moment or where their creative urges are being stymied. They are often dismissed due to the length of time that is spent together, and the vast spread in time between recordings. For some, the practicalities of fitting it into an already busy schedule, makes it nigh impossible to truly work effectively. 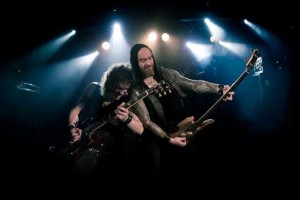 Some find a way around all of that however despite all the pressures. DREAD SOVEREIGN actually came around the same time as TWILIGHT OF THE GODS. The latter morphed from a BATHORY tribute band into an outfit in their own right displaying a wider appreciation of classic eighties metal. The former was more influenced/inspired by a collective ambition to play doom/death. The common factor in both of these bands? One Alan ‘Nemtheanga’ Averill better known for leading the charge of blackened celtic metallers PRIMORDIAL. Quite where he finds the time is amazing. His primary band are obviously known throughout Europe and regularly feature at most of the larger festivals during the year. Guitarist Bones, from stoner crew WIZARDS OF FIRETOP MOUNTAIN, remains in the line-up. But Johnny King has now stepped into the shoes left vacant by the departure of Averill’s fellow PRIMORDIAL alumni, Sol Dubh. King is an experienced hand and able to fulfill the role due to the on-going hiatus experienced by ALTAR OF PLAGUES and his departure from ABADDON INCARNATE.

They made their first tentative steps upon releasing 2013’s EP “Pray to the Devil in Man”. This received a lot of praise at the time and was followed quickly with an early slot at Roadburn (where I first encountered them live). This was followed by a support date with TRIBULATION in Dublin and a spot at Redemption Fest the following year. This was all in support of their debut full length, “All Hell’s Martyrs”, essentially a double LP album. The general response was overall positive. For some it suffered greatly from a lack of editing. The inclusion of the previous EP’s tracks re-recorded and bulked out with the addition of atmospheric intro pieces, along with a general track lengths of up to and over eight minutes, made it a grueling listen at times.

The title track kicks us off and we travel back to atmospheric territories. It comes across as a desolate and windswept terrain, with the clunking of a bell in the background. It builds up in tone over its time-span and sets out the feel of the album to come. You can almost imagine the individual depicted in the album cover being lead to a remote hill to meet their ultimate sentence. Golgotha by way of The Hill of Tara. This leads into the first, and the longest, proper track, ‘Twelve Bells Toll in Salem’. It commences with a decent series of archipelago sweeps that belay their Sabbath influences and powerful drumming from King, who is certainly at home here. The layering of the psychedelic like guitar tracks help create a sense of the occult worship, tribute to evil and witchcraft. No doubt referencing the persecution that has taken place at that particular time and throughout the ages. This all leads into the soaring vocals and distorted bass and drums sections. There is seriously heavy low end here. The lyrics, however, are not particularly the best. At certain stages he extols “I am the dread sovereign” which seems slightly cringe-worthy. At other points, he commands “We Praise Satan”. Certainly not the most original.

If the previous track was more doom oriented, ‘This World is Doomed’, is definitely the rockier one. Kicking back to the days of NWOBHM and bands such as ANGEL WITCH. Riffs and vocals are more traditionally laid out in its structure than before. The guitar lines are particularly to the fore on this one. Definitely one to get the speakers out for. I am still not especially gone on the lyrics. Averill advising to “Take another line” which was replicated to include a pill or a shot. This was in response to someone’s need for “Another preacher, you say you need another teacher”. Obviously since the world is doomed (get it?), we may as well all get blathered. We get yet another atmospheric piece in the guise of ‘Draped in Sepulchral Fog’. Just over two minutes of a mournful and dark piece that is cloaked in feedback and brooding menace. The clunking bell from before crops up yet again.

This is designed to lead into ‘The Spines of Saturn’. And there is a welcome change in patterns and styles.  It delves further into the psychedelic styles hinted at earlier. Reverb effects and masking is incorporated over the vocals to create a hazy woozy effect. Imagine the meeting of SAINT VITUS with HAWKWIND. And the latter is a good starting point. The band have made known of their appreciation of space rock and certainly them and bands like ELOY, GONG, and NEKTAR could be hinted at. At times there is a vaguely Persian or Middle-Eastern feel to it. Elsewhere, the familiar sounds of PRIMORDIAL make themselves known. It would be a push to even describe this as a doom song. The loud and catchy jam sections eventually give way to a massive melody and reverb soaked climax. To finish off, they rock out to a cover of VENOM‘s ‘Live Like An Angel, Die Like a Devil’. It is a decent version as they get down and dirty with it. You could not help feel that it could perhaps have been tagged on as a bonus track and the band would have been served better in producing more original material.

Overall, I was quite happy with it. The band are trying out different things stylistically to stretch themselves somewhat. They never claimed to be re-writing the rule book when it came to doom. The tone works well through the blend of vocals and music. Production wise it is quite impressive and brings to mind the work done on THE DEVIL’S BLOOD. Lyrically, it is a bit hokey though. Perhaps it is all meant to be a little tongue in cheek. It certainly does not remind one of the outstanding work on ‘The Coffin Ships’ for instance. He can certainly do an awful lot better. Also, having two atmospheric pieces and one cover, does make it feel a little short. Perhaps if they had incorporated them into the main songs it would have been possible to include more original material. Hopefully it will lead to some live dates out of it because they are bound to come across well. With a little work and some tweaking, they should be able to create a masterpiece of darkness and evil.