If it ain’t broke; don’t try and fix it. To evolve, you have to grow. Two opposite opinions regarding the issue of change. Often bands develop a sound and disposition from the early days, which they feel works for them individually, and fits the music they play. Slight tweaks may be made along the way as time goes on but they generally stick the original blueprint. Connection to their roots and the fundamentals of the music remains strong throughout. Obvious examples would be the likes of AC/DC, THE RAMONES, Motorhead, and GRAVE. Then you have the more restless and impulsive outfits. As time goes along, many different styles and concepts are introduced. Themes and ideology may be linked but often the sounds portraying it will change. Be it a change in personal, frustration with a previous genre or influences from other artists. Whichever approach is employed, it must be for the right reasons. FAITH NO MORE, MASTODON, KING CRIMSON, PIG DESTROYER, DEVIN TOWNSEND, PRIMUS, ANATHEMA, CARCASS and hoardes more have all been quite restless in their pursuit of their next step.

And it is with the concept of change, that we tackle DISCONNECT. Formed under the vision of Adam Miles, they have undergone a number of changes, both in players and styles. The Belfast based outfit started off in 2011, and released a demo track ‘Blind’ that same year. They had been established as a studio outfit initially but around that same time, they begun playing live with the likes of ForChristSake, Steering Fail, Katabolisis, Crows, WeedPriest and Gargantuan. This was predominately in the Belfast area, and with a drum sequencer. This and their debut E.P, Dis-Ease’, carried an industrial style with splashes of black and sludge. A debut album, ‘Disengage to None’, followed not long after after. A decision had been made by that stage to call it a day and follow a different path. Miles, by this stage, had two two side-projects on the go; Cranium Voyeur and Husk. Miles then set up Whitebody with Jamie Scott to continue their association. M.J.D came together from the original line-up as a once off to play much of their tracks, albeit more faster and heavier. The band was revived temporarily with a different line-up, whilst Miles also contributed to funernal doom outfit Abattoir simultaneously. It was brought back to life to coincide with the release of ‘Subsistence’ in 2015. It further showed the band looking forward, rather than back. Live dates were played with the likes of The Crawling, Nomadic Rituals, Wet Nurse, Zombified, Acid Age, Unyielding Love and Knifedoutofexistence. The following year saw another album being released in the guise of ‘The Sum of all Our Parts’. They played their debut Siege of Limerick, Metal to the Masses, Seshtival in Tipp, first dates in Cork and Dublin and return to Poserfest in Lisburn along the way.

In preparation for the forthcoming album, this release found its way out. It was originally scheduled to be as part of a split with another band. A stop-gap it may be, but here it is now in all its ugly glory. The band seem to have decided to use this as a closing point to previous incarnations, before moving forwards with a new album and a new line-up. Opener, ‘Exist Through Suffering’, begins with a snarl that leads directly into the vocals and playing. The pace and aggression on show is quite unlike anything they have displayed before. More of an emphasis on the extremities metal has to show. Therefore, more of a death and grind spirit on show. The bleakness remains from previous releases but with more of a feral approach. This is particularly true of the vocals. A few guitar riffs punctuate the the growls and hammering beats. The drumming on this was via sequencers as they were between drummers at the time. It transitions into a meditative like segment before changing back again. Definite weight on the bass-lines from Paul McRoberts formally of Honey for Christ. There is a palpable air of disgust. The vocals fall away briefly to let the instruments power through. Feedback to the end, with vocals screaming in the background.

‘Limbo Subside’ contains a Tom G esque ‘ugh’ before a chugging bass and pounding drums. The vocals are still on the harsher side of affairs but with more of an industrial approach than in the track before. Perhaps belying their earlier roots. The bass and guitars have that grinding industrial feel also. The pace is slower here but still with a considerable weight. Vocals get harsher as the pace intensifies. A few filthy sounding riffs poke their heads through. A set of sorrowful vocals emerge. When set against the harsher ones, it makes for an interesting contrast. The track eventually fades into nothingness. ‘Transient Gleam’ sees a black metal sounding opening. Harsh and filthy vocals lie low in the mix against a fog of steel. This soundscape dominates the track and is quite minimal in its construct. It has the textures of artificial lights and electronic hums. The latter part shimmers in a slightly uneasy fashion. There is an sense of dislocation and isolation to it. Those who work night shifts can perhaps relate to it.

These tracks offer up a tantalising glimpse into what might lie ahead for the band in the future with a proposed new album on the horizon. Some might claim for it being quite a radical change in terms of approach. For me, they are simply distilling their sound in a different fashion. The sense of wretchedness and bleakness that has permeated all the previous work still remains. It is just being done via sharp intense bursts rather than the drawn out despondency from before. It has not been stated as to what band is was that the intended split was set to be with and whether their musical styling preempted this change. They were, perhaps, going down that route naturally. All three numbers have been well received during recent live dates. Despite its brevity, there is an abundance of ideas on display. Shades of industrial, black, death and grind all feature at different points. The production and mixing isn’t perfect, but suits what is being offered. 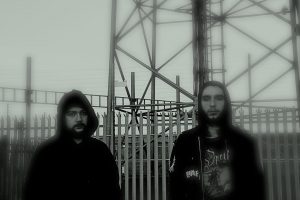 This release is also set to mark the end of an older era and looking forward to the beginning of a new one. James Thornton has since been employed on drums and synths. He made his debut on ‘Tragic Doom’ EP, which saw physical release in the last days of 2018. Having a drummer is obviously going to help on the live front. A busy start of 2019 saw them perform at Metal to the Masses, Warzone Deathfest, the Cork version of Seshtival, and a charity night for Scoliosis Ireland, support to Coilguns, The Crawling and a one-off experimental set in Belfast They also head-lined a date with Order Sixty Six and Towers. Having a settled line-up, and members willing to contribute ideas, can only help aspects going forward. The many side projects of Miles seem to be on the back-burner at the moment allowing him to devote his time and effort solely to Disconnect. Plans are already afoot for a release this year. They are already set to perform at Siege of Limerick again. Here’s to artistic expression going forward.