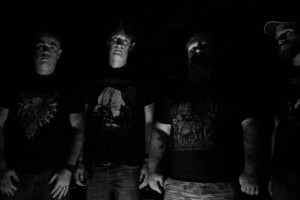 Band classifications can be a tricky prospect. Simple tags such as Black or Death Metal will work when listeners can identify characteristics of that genre but not when it is more refined and subtle. On the other hand, more complex classifications may be more appropriate but may confuse the casual fan. This is the conundrum faced by this new Cork quartet. And perhaps one that I will allow the reader to draw their own conclusion. There is certainly the whiff of black metal in their sound and perhaps it is of no wonder. It has influenced the sound of some of their former outfits. Ollie O’Shea was the more obvious choice through his involvement with late nineties band, DOMINUS. Black metal has also colored the spectrum of many of Liam Hughes’s past dealings in bands such as SOOTHSAYER, DAYS OF NIGHT and KAWTIKS. The latter also provided gainful occupation for Patrick Gillen (but then again few metallers in Cork were not in KAWTIKS). Only did Eoin Costello play in mainly hardcore or sludge bands.

And it is probably the latter influence which forms the backbone of this demo. ‘Within the Sphere’ is perhaps the most overtly black metal sounding track. The murky dark beginning with its echo-y vocals leads to cleaner guitars and more recogniseable sections. The drums are solid throughout and there are occasional leads into blastbeats. ‘Rust and Ruin’ begins with all the traits of post metal. The guitar lines are sparse, the bass is rhythmic and the drumming is subdued. The pace increases to match the vocals employed by Hughes but remains within a certain keel. Indeed, the guitars infuse a certain degree of melody. 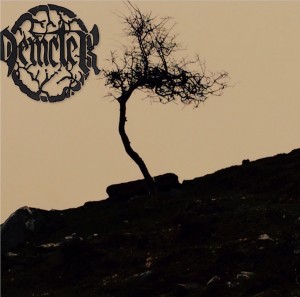 There is a palpable feel of danger to the opening of ‘The Lizard Cave’. The grime and filth of their sludge backgrounds comes to the fore. A buzzsaw guitar and some superb drumming fires the band through a murky deluge sound-tracked by frenetic howls by Hughes. Closer ‘The Shroud’ is more of the same.  Hughes combining gruff vocals with shouting whilst the band plow away in the background. At times they invoke memories of DEFTONES and WILL HAVEN in terms of the riffing department but with a different vocalist.

A decent first effort overall. The production is clearly not the most pristine. For some that could be a part of their charm or an off-putter. At a demo stage, you can perhaps expect it to be somewhat rough around the edges. The overall combination of styles was slightly uneven at times but that will come with time hopefully. Having made their live debut as support to SOOTHSAYER at the end of last year, they are set to appear again at Cork’s Urban Assault on the 25th February 2017. Whether the title of post sludge hardcore with black metal undertones is used on the poster remains to be seen.