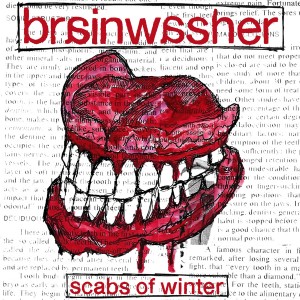 BRAINWASHER are one of the more recent additions to Galway’s impressive list of hardcore metal bands. With members who boast an impressive track record in such bands as TRENCHES, THE BOY YOU HIT IS DEAD, KID-Oh, GUMMIDGE and HARVESTER.

The first thing that struck me about this release, is the sheer ferocity of it. Four lads from Galway who know what they want to play and how they want to play it. Mixing old punk style vocals with the sound of the hardcore movement perfectly on the first track ‘Static Television’. With a theme running through it that resonates with today’s ‘mindless media’, the lads make it clear that this is our future if we allow it to be. A perfect opening track for such a great EP. Second track ‘Yaws’ is very powerful track that if written or performed by a mainstream chart artist they’d be hailed an idol and praised for highlighting such issues.

‘First World Problems’ is exactly what it says, a very well constructed song aimed at today’s youth who are led like sheep. This is undoubtedly the stand out track on the EP and has all the signs of being a live favourite for its sheer venom. Sounding a lot like AGNOSTIC FRONT this is certain to leave you questioning not only yourself but everything that you percieve around you. Closing track ‘From Nothing To Nowhere’ is the longest on the EP, but so worth the wait. With its slow crescendo build-up, you know the track and vocals are going to kick in proper at any time. By the end you’re simply left wanting for more… and rightly so!

In a scene where we are flooded with so called ‘hardcore’ bands. It’s great to find a band from home doing this style so well. Do yourself a favour and download the album for free from bandcamp. Buy a t shirt, which look pretty cool. And take pride in the fact that a band such as this is doing the business amongst the Galway faithful.

BRAINWASHER also recorded another quality track, ‘King Of Pigs’, during the same session which will be released as part of a split 7″ in the coming months. Definitely something to look forward to!!!