In The Halls Of Our Ancient Fathers by Celtachor (Black Metal, 2010) 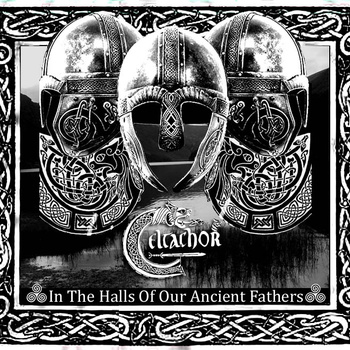 Celtachor take its numerous influences from black, doom, and folk metal. The main focus of their songs is to showcase the mythology of Irish sagas, such as the grief of the “Son’s of Tuireann” and the “Death of Cú Chulainn”. The use of tin whistles and bodhráns in their music helps to create an atmosphere wherever possible. With a full line-up in place they released their official debut CD, ‘In The Halls of our Ancient Fathers’ in 2010.

Essentially this is a demo. But not your typical, ‘here are some of our songs, will you sign us?’ type. They have a story to tell with this CD and each track can be seen as a chapter of that story. As such the black metal vocals aren’t too grating and can be made out easily. What’s the point of telling a story if the delivery is unintelligible. The tale itself is of Lugh. Grandson of Balor, King of the Fomoire, an ancient semi-divine race said to have inhabited Ireland in ancient times. Balor was prophesied to be killed by his own grandson, so he resorts to some drastic measures to prevent his daughter from bearing a child, but obviously fails.

Being heavily influenced by traditional black the first track, ‘Nemed’s Wake’, is a typical throwaway instrumental intro, followed by proper first track, ‘The Rise Of Lugh’. A pretty good metal track, with the addition of some well placed tin whistle sections. ‘In The Halls Of Nuada’ is first track to really grab the listener with a strong delivery by the band, it’s easily one of the best on the CD. ‘A Warning To Balor’ is a good track, but being sandwiched between ‘…Nuada’ and the final three much better tracks it will most likely end up being overlooked by most listeners. ‘Riders Of The Fomor’, ‘Sons Of Tuireann…’ and ‘The Wavesweeper’ are placed perfectly at the end of the CD. If the demo could have been condensed to these three and ‘…Nauda’, with maybe a little more consideration given to each, it may have resulted in a better release. But then they couldn’t have conveyed the story they’re trying to put across. So! Catch 22, I suppose.

The ancient Celtic themes and atmospheres are well thought out and the band are competent songwriters and musicians. And the venomous vocal style suits the music perfectly. But the production quality is the biggest flaw with this CD.

A new Celtachor EP is in the works and is due to be released later in the year. Given the correct recording treatment, this and any other future releases from Celtachor could be something to really look forward to.