Latest news from the PUTREFY camp is that the band have just secured a deal to release their long awaited new album with New York based Death Metal label, Severed Records. The album ‘Knelt Before The Sarcophagus Of Humanity’, which is due to be out by October 2014, was recorded by Darren Hutton and PUTREFY at Electrichead Studios, Ballymoney between late 2012 and 2013. Although the album has been ready for a good while now, the band waited till a new stable line-up was found and also searched for a suitable label to release it. 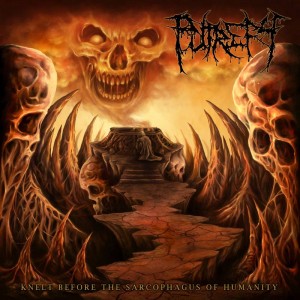 The final CD layout/booklet is also nearing completion with killer artwork for the album has been created by Krisna at Ultra Bat Illustration & Design. And will feature eight searing cuts of 100% honest and brutal Death Metal…

Track Listing ;
1. Wading through Human Blood
2. The Lament Configuration
3. Awakening of the Stillborn
4. Smashed down with Iron
5. Life Deprivation
6. Bring out your Dead
7. Faces in the Vortex
8. Knelt before the Sarcophagus of Humanity