It’s been ten years, ten long years, since SLIPKNOT last graced our shores. A decade without The ‘Knot left a hole in the hearts of their Irish fans in the shape of nine masked lunatics. Yet, in their absence, it appears that their popularity grew, resulting in tickets to their Dublin show at the 3Arena selling out almost instantly. With this level of hype circulating throughout their fans, two albums worth of tracks to catch up with live, and KORN billed as the main support act, this gig promised to be a monster right from the get-go.

Unfortunatley! KING 810 had already finished as I entered the venue, but KORN’s ten track set was beginning. With huge, crunchy riffs designed to command and move a crowd with ease, and they did just that. Opening with ‘Here to Stay’, KORN threw their audience into a frenzy. Making the most of their 40 minute stage time, the pioneers of Nu Metal delivered a strong performance, jam packed with classic tracks including fan favourites like ‘Freak on a Leash’, ‘Falling Away From Me’, and ‘Got The Life’.
They even snook a few riffs from METALLICA’s ‘One‘ into the middle of a song to catch people off-guard. Finishing up with the timeless classic, ‘Blind’, from their 1994 debut album, KORN played a strong and entertaining set. The only downside being that Jonathan Davis’ vocals seemed a little low. However, their heavily bass orientated signature sound was more than capable of ensuring that everyone could still feel that classic KORN kick.

Adrenaline was running high as the lights dropped for SLIPKNOT’s set. A recording of the slow melodic intro to their latest record, “.5: The Gray Chapter”, began playing over the speakers creating a bizarrely calming effect throughout the audience. As the song faded into ‘Scartastrophe’, the composition transformed into aggression and the audience erupted with ten years worth of pent up anticipation. The energy, both on and off stage, was absolutely electric as SLIPKNOT began tearing through hit after hit. Their sound held up strong as a testament to why the Iowa band are comprised of nine musicians. The depth that this odd arrangement produces live is incredible. It fills the room from wall to wall and proceeds to relentlessly beat on anything within it. This gigantic and inventive sound gives lead singer, Corey Taylor, the space to let loose with an incredible vocal style that ranges from mellifluous to so ruthlessly aggressive that it damn near takes a bite out of the audience. 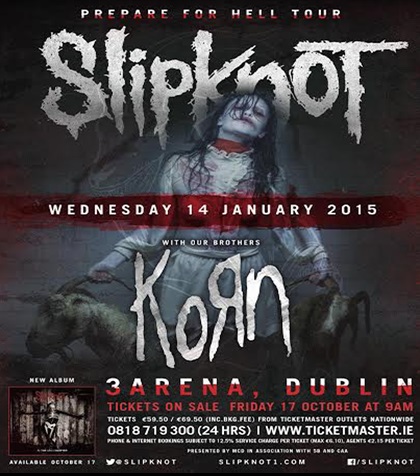 Immediately following ‘Scartastrophe’, while the crowd were still in a daze from the opening track, the countdown to ‘The Heretic Anthem’ could be heard, creating a segue into another crushing wave of Metal. That classic chorus “If you’re 555 then I’m 666” allows for some great call-and-response interaction between the band and the audience. Again, the energy levels were through the roof. ‘Heretic’ also brought the first of many pyrotechnics blasts for the night, as jets of fire shot up through the air, lighting up a stage that was already filled to capacity with moving platforms and hyper-active musicians. From here, they charged headlong into another classic from their Iowa record, ‘My Plague’. The Des Moines’ maniacs’ set was as long as it was heavy, covering all the bases from hit singles to early material that initiated their massive musical framework. At times though, it seemed to blur the lines between Metal and Hard Rock. Tracks from their “Vol. 3: The Subliminal Verses” record like ‘Vermillion’, ‘Duality’, and ‘Before I Forget’ inculde such passionate and dulcet choruses that it almost becomes radio friendly… At least, for a few seconds. Unfortunately though, the crowd’s vocals often completely overpowered Corey Taylor’s, making it very hard to hear him sing. It appeared that there were moments when his sound may have been suffering from the same problems as Davis’ during KORN’s set. On the other end of scale the likes of ‘Psychosocial’ and ‘The Negative One’ bring their ferociously aggressive signature kicking and screaming back into exsistence, transforming the arena into a battleground and heating up the cold January night.

SLIPKNOT were quite proud to show that they are still very much in touch with their original roots, and did so by unleashing a wave of tracks from the turn of the century for the closing quarter of their set. If they were to go out, they were going to do it with a bang, and what better way than with monstrous songs like ‘Wait and Bleed’ and ‘(Sic)’, steaming rolling anything in its way and the crowd reacted in kind creating brutal mosh pits. ‘People=Shit’, with an unrivaled level of aggression that almost seems to amplify even further in a live setting. And ‘Sufacing’, which Taylor affectionately refers to as “your new national fucking anthem”, is a great example of their power and a fantastic testament to why the band works so well. One of The Nine’s greatest set-pieces is during ‘Spit It Out’. The hugely aggressive outro is held off just before the final assault as the Taylor orders everyone to hunker down on the floor. After which the band resumes the build-up and call for everyone to “jump the fuck up” at it’s climax. Complete anarchy ensues as the entire arena leaps to its feet with mosh pits erupting everywhere, and the members of Slipknot look out at the madness that they have created. Seeing thousands of people crashing into one another like a turbulent human sea, is nothing short of jaw dropping! 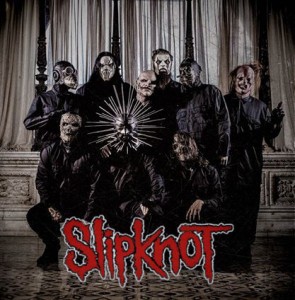 These final tracks defined their style and made them into the behemoth that they are today and shaped the lives of so many teens throughout the early years of this millenium. In 2015 these tunes still pack a punch hard enough to knock your fucking teeth out!

After a decade of waiting for SLIPKNOT’s return, they’ve managed to wrangle up a gig that has proven why they’re one of the biggest names in Metal today. The pure power of their sound, together with the energy involved in their show and the sheer spectacle that comes along with it is exactly what the fans wanted. It’s what the older fans have craved for a decade and what the younger fans deserved to experience for themselves. There’s no question about it, the eighteen legged juggernaut devilered this in full. Setting the standard by which all touring metal bands visiting Ireland will now be measured.