Recently awarded the European City of Culture status for the upcoming 2020 celebrations, Galway city is, by far, the most diverse town in Ireland. So much so, in fact, that nobody seemed to bat an eyelid when a bizarre quintet of life sized monsters known collectively as LORDI announced that they would be appearing in Monroe’s to supply the crowd with their unique brand of horror themed rock. Instead, queues of people were wrapped around the venue to embrace the occasion, eager to get out of the cold November night and into the hot, sweaty mosh pit.

The evening began with a hugely theatrical performance from a Swiss act called SILVER DUST. This interesting ensemble took to the venue’s second stage and instantly wooed the crowd through a blend of heavy music and eye catching visuals. Producing a slow weighty sound that was reminiscent of NEVERMORE, topped with a melodic vocal style that sported a striking resemblance to that of SYSTEM OF A DOWN’s Serj Tankian, Silver Dust’s influences proudly shone through their music. Although their style often seemed to fit perfectly into an almost romantic gothic feeling, coupled with a heavy guitar crunch, Silver Dust were not afraid to bend the rules and force the music to do their bidding. For example, drummer Mr. Killjoy, led the band into one particular rhythmically driven track that would have more in common with dance acts like Infected Mushroom, but it still worked beautifully and never seemed out of place.

Their set was strengthened further by the band’s visual style. Appearing in top hats and attires that resembled a dark take on Adam and the Ants, SILVER DUST set out to be seen just as much as they were heard. With a call and response section played out between lead guitarist Tiny Pistol and a video of Phantom of the Opera, lead singer/rhythm guitarist Lord Campbell sporting a guitar dotted with blue LED lights along the fretboard and even the appearance of a stylised blunderbuss, SILVER DUST quite simply put on an exceptional show. 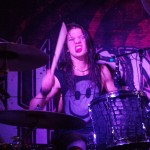 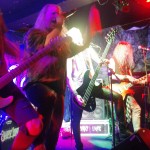 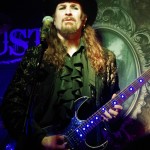 Next up were Finnish rockers, SHIRAZ LANE. This young band exploded onto the second stage with all the flare and energy of classic 80s acts like GUNS’N’ROSES. SHIRAZ LANE’s sound acts as something of a time machine, whisking the listener back to the days of tank tops and hairspray when high pitched vocalists and power ballads ruled the world of rock music. Each note that resonated throughout Monroe’s created a feel-good atmosphere that was impossible to shake off. Each member of the band seemed to feed off the crowd’s energy and deliver it back ten-fold. There was an element of fun to their simplistic song structure that was undeniable.

Not a second went by without something exciting happening on stage to keep the audience enthralled as the band bounced in unison to the rhythm or drummer Ana Willman launched his sticks into the air. Hannes Kett’s vocals here sounded like a blend between Justin Hawkins of THE DARKNESS and SKID ROWS’s Sebastian Bach, reaching for tantalisingly high pitches and never falling short. The bands guitar sound was filled with distortion, but still managed to sound crisp and clean, ensuring that each bar could be heard loud and clear. Although the riffs were easy to get into due to their classic rock attitude and pop punk overtone, it was Jani Laine’s lead guitar work that really stood out. Ripping out impressive solo’s with THIN LIZZY levels of accuracy and incredibly fast runs, Laine turned this rock ‘n’ roll train into a party juggernaut.

The main stage was reserved for something unusual; something that was both intimidating and entertaining in equal measures. Something inhuman! When members of LORDI lined up on stage in massive, creative monster costumes, it was evident that it was also going to be something special. 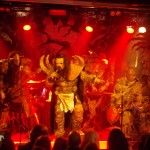 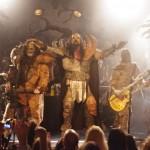 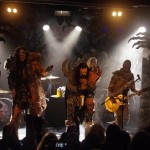 The sheer size of this band’s appearance made the evening both a blessing and a curse for fans. LORDI are well known not only for each member’s elaborate outfits, complete with a demonic bull and a crazed doll, but also for the on-stage theatrics that play out periodically during their set. In the past, LORDI fans may have seen the butchering of medical patient during ‘Dr. Sin is In’ or a hip-hop goblin invading the stage during ‘The Riff’ before being slapped and sent on its merry way. These moments always served as being comical and entertaining. However, due to the small sized stage in Monroe’s and the large amount of space needed to house five monsters and their musical shenanigans, these pieces of LORDI lore were cancelled for Galway’s stop on their European tour. What happened instead was a once in a lifetime show in which lead singer Mr. Lordi took requests from the crowd and built the night’s set-list around them.

Beginning the show with the latest album’s hilarious opening track, ‘Let’s Go Slaughter He-Man’, and pushing straight into the equally catchy ‘Babez for Breakfast’, Monroe’s crowd were instantly whipped into a fury on the jam packed dance floor. Before starting to chant for random tracks from LORDI’s eight album long back catalogue, the crowd first requested the 2006 Eurovision winning anthem, ‘Hard Rock Hallelujah’. Knowing this was coming, Mr. Lordi approved the request to “get it out of the way” and Galway’s monster fans erupted once again in appreciation. 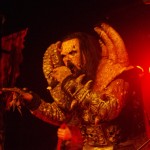 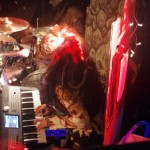 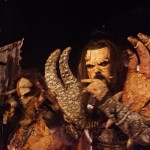 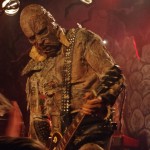 Leaving the usual theatrics aside left the band more time to be a band. Not just a line of heavy metal monsters, occupying the stage, but almost more human than they would have seemed before. Mr. Lordi spent his time cracking jokes and taking stabs at guitarist Amen in between songs. As requested by the crowd, the set-list played out like a best of, spanning the Finnish band’s entire career and systemically selecting tracks from each album as the night progressed. ‘Bringing Back the Balls to Rock’ and ‘Who’s Your Daddy?’ satisfied the fans who may have joined the monster army during their best-selling “Arockalypse” record, while older fans were treated to ‘Blood Red Sandman’, ‘The Devil is a Loser’ and their debut single from 2002 ‘Would You Love a Monsterman?’. There was also a wealth of newer material dotted throughout the 90 minute set list, including choice cuts such as ‘Nailed by the Hammer of Frankenstien’ and the band’s latest offering, ‘Hug You Hardcore’.

Even though it was easy to tell that some of these numbers were somewhat unrehearsed and may have been dragged from the tracklist graveyard, LORDI still managed to keep the set sounding tight. This displayed the band’s passion for their audience as they tended to their every musical need; a statement that could not be said about most touring bands. Their signature stomping guitar and huge bass sound simply filled the room, forcing everything in their monstrous path to sway with the beat. The symphonic sound produced by Hella’s keyboard’s kept everything contained within the realm of rock, never letting it slip into full blown metal as she twitched and jerked in character throughout the night. Mr. Lordi’s catchy choruses and enormous chant sections ensured that even those unfamiliar with the songs would get the chance to sing along. 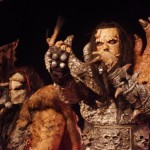 It’s easy to dismiss LORDI as simply a visual act. Their costumes are a deliberate focal point and most of their songs are written about the fact that they are indeed monstrous beasts. However, the easily digestible hard rock structure of their songs makes them a hugely entertaining band. When you strip away the extra gimmicks and scenery that comes with their shows, you’re greeted with the simple fact that LORDI are still an incredibly amusing, talented and fun live act. Galway got the chance to experience this first hand as the monsters left a trail of completely stunned fans in their wake.

Eoghan Murphy is a Galway City based music and gaming journalist. Born and raised on 1980s thrash metal, this ex-vocalist also enjoys a touch of hard rock and hip hop. When not banging his head to extreme music, he can usually be found knee deep in piles of video games, competing at tournaments and writing for www.Hit-Start-Now.com or spinning chiptunes on Flirt FM at 2pm each Thursday as the Galway Gamer