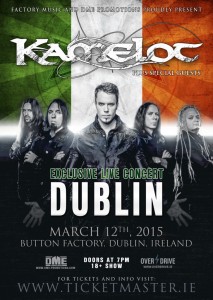 There’s something enjoyable about watching a homegrown talent live and as with the vast majority of our talent you’re left scratching your head wondering how the hell are they not signed or bigger than what they are. STORMZONE should be a lot bigger than what they are. With five albums behind them already these guys put on one hell of a show and the crowd lapped up every minute of it. John ‘Harv’ Harbinson vocals are something to behold and he’s hitting those high notes with such ease, it’s proof that practice does indeed work. The band are flawlessly tight tonight and really seem to enjoy themselves and what they’re doing on stage. With each song they they show what this band is capable of and with an already solid fan base, it surely won’t be long until STORMZONE are tearing up venues worldwide, and rightly deserved.

It’s been seven years since KAMELOT played here and during that time they gained a new vocalist, Tommy Karevik. To say we are eager to hear him live is an understatement. With such an amazing set to follow after STORMZONE, KAMELOT waste no time in proving why the wait was worth it. Not only does the band sound phenomenal but Tommy has knocked the ball right out of the park. Already known to us through the previous album “Poetry for the Poisoned”, Karevik quickly proved that he can cover all of the bands material live. And boy can he!!! Possessing a vocal range that breathes life to an already amazing set list and surrounded by exceptional players and an amazing backing vocalist in Simone Simons, Karevik is a natural front man for this band. He even had the crowd engaging in a BRUCE DICKENSON inspired vocal performance.

Thomas Youngblood is enjoying the set list tonight both interacting with the crowd and his fellows band mates. It’s easy to hear why these guys are loved by their fans, intelligent playing seems to weave around the lyrics as they take you on a journey live. While Karevik has the crowd eating out of his hands, and we are loving it. Although the Button Factory seemed to be more personal and intimate a venue, KAMELOT deserve to be on a bigger stage. Who knows hopefully by the time they play here again we will have that bigger venue and these guys will play in it. Cause I for one will be first in line to see a truly amazing live band again.

KAMELOT  –  Official Website, Facebook,Youtube, Twitter
New album “HAVEN” will be released worldwide (excl. Asia) on Napalm Records/Universal and Napalm Records/ADA/Warner on May 5, 2015 (North America) and May 8, 2015 (Europe and rest of the world).
*** Pre-Orders available here ***