CANNIBAL CORPSE hit Dublin hard last Tuesday evening bringing their “Red Before Black” tour to Dublin’s Tivoli Theatre. The second I walked into The Tivoli the atmosphere was charged and there was palpable energy in the air which was noticeably different to the last 2 gigs I attended there previously this month. CANNIBAL CORPSE need little introduction as the death metal legends have been putting out a sonic barrage of violence since the late 1980’s.

There were only two bands on the bill this evening which proved to be more than enough brutality. MAN MUST DIE from Scotland started off the nights proceedings. Although not overly familiar with them, it was certainly good to see such clear and vocal support for an opening act with many crowd goers obviously being ravenous fans. They blasted though their 45 minute set surprisingly quick with most songs containing a lot of groove and feel within the growls and blast beats. 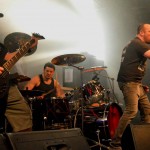 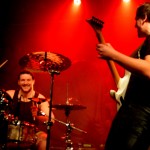 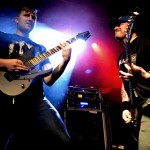 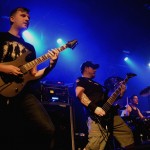 About twenty minutes after man must die wrapped their set, the stage turned dark and the background music drew to a close. They were ready. CANNIBAL CORPSE casually saunter on stage. No eye contact… No banter… There’s no need.

They know exactly what’s about to happen. The band immediately launch into ‘Code Of The Slashers’ and all hell breaks loose. The circle pit immediately spawns out of nowhere and for once I am truly glad to be safely on the other side of the barrier with my trusted Nikon. About three songs in I feel a body being thrown from the crowd onto my back. I quickly get out of the way of the mosher and remind myself to be more aware as this will probably happen quite frequently. CANNIBAL CORPSE, unlike most bands did not differentiate from their lighting scheme, blood red.

The bands vocalist, George ‘Corpsegrinder’ Fisher, with a neck that should really be classed as the 8th wonder of the world , forever spinning and generating a real gust I could feel while trying to capture an image of the spectacle. His live performance is quite energetic. 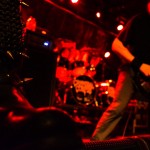 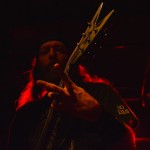 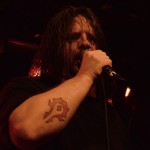 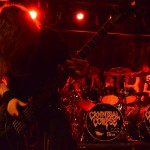 The band did not fail to pull out some classics from their fourteen album long catalogue, such as ‘I Cum Blood’, ‘Stripped, Raped and Strangled’ and culminating in the legendary ‘Hammer Smashed Face’ which the band performed in the 1994 film Ace Ventura which Jim Carrey personally fought to get the band to be in the film, being a huge fan of the band himself. And yes, there were people doing the dance. Corpsegrinder did the traditional “Do you want one more?!” act for the crowd which usually leads to them having one or two more, buuuuuuut no. That was it. Goodnight.

Hope you come back again soon. It was brutal.