A Monday night show in Dublin is always going to be a challenge for those living elsewhere. When this Monday is the one following on from an extremely busy and hectic St. Patrick’s weekend, the challenge becomes even greater. If there ever was a pick me up for those poor souls returning to work today, it would be tonight. Since tentatively coming back in 2000, the band have been in cracking form, with their proper reunion coming to being following the departure of Joey Vera and John Bush from ANTHRAX. The Saint are making their official debut in the republic tonight, having only played Belfast previously. A dream for fans that has finally come to fruition.

After a somewhat hectic and rushed trip to Dublin, it was straight down to the Voodoo Lounge. The main ambition was to meet up with a few friends of mine, get to the venue and to get a few words with the band. It was great to bump into familiar faces and especially to escape from the cold evening. In the practically deserted venue, I aimed to meet the band members and get their opinion on a number of matters. The first two were achieved without much fuss or bother. The last would prove to be somewhat more of an obstacle and was unfortunately not the case in this particular instance.

It was up to Northern metallers, SINOCENCE, to open up proceedings. Perhaps a choice that may have surprised a few beforehand as many would have expected a local support in order to drag out more on a night like this. It is revealed afterwards that they have provided the back-line for both tonight and up in Belfast tomorrow night. So credit due in that respect.  I have to admit that they fell off the radar for me in some respects. I remember being quite impressed with “Scar Obscura” when it was released but have heard little about them in the meantime. From looking further into them beforehand, I discover that a trio of EP’s are being released under the banner of “No God’s, No Masters”. Two have been issued so far, with the third currently under production. 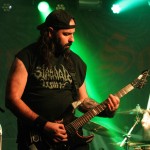 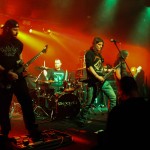 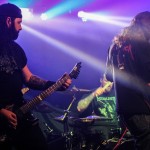 They are somewhat of a frustrating band live. At certain points, they come across as being somewhat stiff and bland. At other points, they really allow themselves to lock in and let themselves go. Opener, ‘Long Way Down’ makes the band sound a bit unprepared and the vocals of Moro is bit off at times. They are certainly capable of opening themselves up on tracks like ‘Code to Self Slaughter’ and ‘Ascension Code’ where you can see where they have received so many plaudits. Their twin influences of the heavier thrashy side and more melodic elements meld well here. Disappointingly, there is very few present there to witness it. It can’t have been easy for the band but they cope admirably with it. There are nifty little riffs throughout courtesy of Moro and Anthony McCaughley. The lead vocals get better as the set goes along and certainly when backed up by bassist Jim. If they are to proceed in the manner of closer, ‘Metal Box’, then more for the good. Definitely a band worth checking out but hopefully in front of more bodies.

ARMORED SAINT may have released their last studio album two years ago but have just put together a new live album in the guise of “Carpe Noctum”. This was their first in almost 30 years since “Saints Will Conquer” back in 1988. The band financed this through the means of a fundit campaign. Such is the delicate nature of the recording industry at the moment. For many, this is their first chance to see the band in the flesh. Some may have caught John Bush during his spell in ANTHRAX, or Vera’s spells in FATES WARNING or many others, the Sandoval brothers were kept busy also. Few would have witnessed this lineup together. I hasten to use the phrase ‘original’ due to the tragic death of David Prichard back in 1990. “Win Hands Down” is their last album but it was considered to be one of the best releases of 2015 and its title track goes down a storm as the opener. Especially when combined with the eternal title track of ‘March of the Saint’. The band are in blistering form and there is a real sense of camaraderie involved. Thankfully, the audience has begun to fill up at this stage as well. Bush tells the crowd about the N.S.F.W video of his elderly neighbour for ‘An Exercise in Debauchery’. 2000’s ‘Control Issues’ is perhaps a portent as to what happened next. 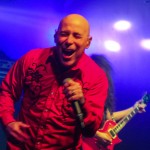 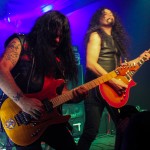 Bush had been noticeably ired by something for the past few numbers and it finally came to a head. Seemingly a part of his ear plugs had become lodged in his ear and was causing him huge complaints. His concern was that it became stuck in there. The set was stalled whilst requests were made for a set of tweezers to remove it. Eventually, the problem is sorted out and they begin back again. It may have not been ‘In An Instant’ but certainly was preferable to the band having to stop the set entirely due to this strange reason. The band visibly appreciated the patience and sympathy shown by the crowd present and launch right back into their set. The band may have came to fame during the thrash era of American metal but they always had more in common with the traditional European metal scene. Having the chops of a thrash outfit whilst combining it with the melodic nature of a band such as IRON MAIDEN, DIAMOND HEAD or JUDAS PRIEST. Bush’s vocals are still a joy to behold and especially when in combination with Vera and Gonzo Sandoval. Few bands of the thrash scene had that versatility. They are also glad to get ecological on us when introducing ‘Mess’, concerning what state we are leaving the planet in at the moment. 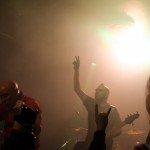 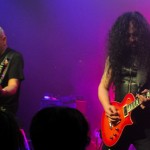 The powerful couplet of ‘After Me, The Flood’ and ‘Right Hook From Left Field’ sets us up perfectly for what is to come. ‘Symbol of Salvation’ was produced during an era of flux following the death of Prichard and the changing scene of American metal at the time. Considering it was possibly one of their best received album at that stage, it was a shame they split shortly afterwards. ‘Reign of Fire’ is an anthem that works in any decade. The set is concluded by the one-two punch of ‘Can U Deliver’ and ‘Mad House’ from their timeless debut. The crowd chant their name and roar their approval. A promise to return is issued by the band and hopefully it will be kept up. 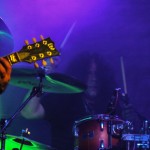 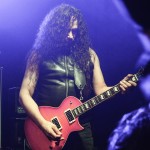