IRON MAIDEN CONTINUE THE “BOOK OF SOULS”
WORLD TOUR INTO 2017

Savage news to wake up to on a Friday Morning…

METAL legends IRON MAIDEN continue their hugely successful The Book of Souls World Tour into 2017 with a series of European arena shows opening in Antwerp, Belgium on April 22, Maiden’s first visit to this city since 1981 on the Killers Tour! The band then travel to Germany for shows in Oberhausen, Frankfurt and Hamburg before heading into the UK and Ireland for an extensive series of concerts in May including a return to Dublin, their first visit here in seven years, for a date at the 3Arena on May 6. 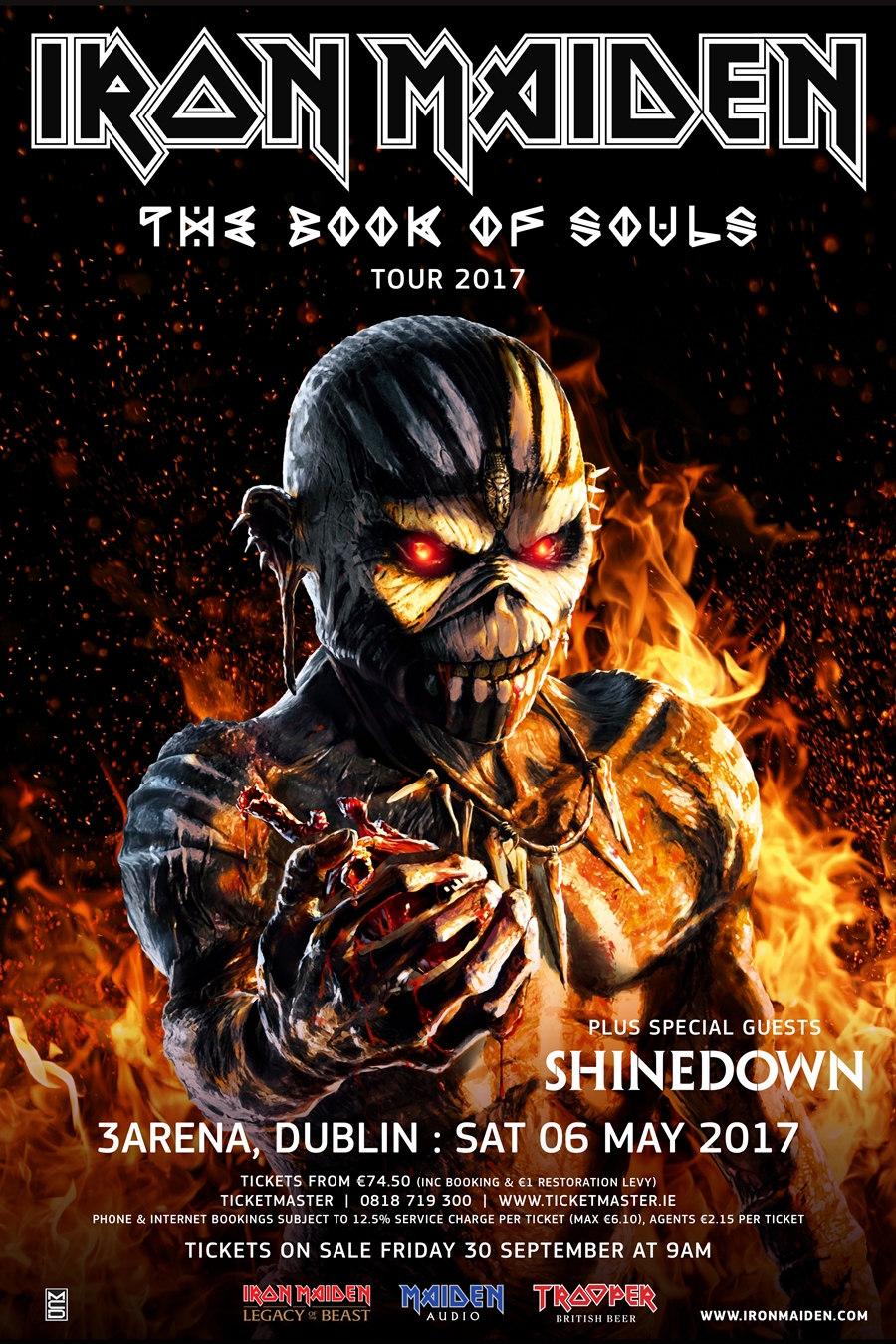 “The Book Of Souls” album debuted at #1 in 24 territories : Argentina, Austria, Belgium, Brazil, Croatia, Czech Rep, Finland, Germany, Greece, Hungary,  Israel, Italy, Japan, Mexico, Netherlands, Norway, Poland, Portugal, Serbia, Slovenia, Spain, Sweden, Switzerland and the UK. PLUS #1 in a further 19 territories where physical/retail charts are no longer published, only Digital ones: Bolivia, Bulgaria, Chile, Colombia, Costa Rica, Ecuador, El Salvador, Guatemala, India, Lithuania, Luxembourg, Nepal, Nicaragua, Panama, Papua New Guinea, Paraguay, Peru, Romania, Slovakia. The album also debuted at #2 in Australia, Canada, Denmark, France, Ireland and New Zealand, #3 in Turkey and #4 in the USA and South Africa.
“The Book Of Souls” World Tour opened in Florida, U.S.A in February 2016 visiting 36 countries using their new 747 jumbo jet Ed Force One piloted by Bruce which flew band, crew and 22 tonnes of equipment over 61,500 miles (99,000 km) across six continents during the 72 date leg playing to around 1.5 million fans. The Book Of Souls is Maiden’s first ever double studio album and their most successful chart-wise to date, debuting at the #1 spot in over 40 countries around the globe.
Steve Harris says, “The whole band is really enjoying this tour and though we love playing festivals and stadiums, it is terrific to return to the intimacy and atmosphere of arenas for a few shows. The songs from The Book Of Souls album and the new Maya-themed Eddies and stage sets have gone down really well and fan reaction has been amazing. And of course we know our fans appreciate us playing a lot of the older songs too, which we will continue to do.”

No further European cities will be added to this schedule for 2017
Special Guests on all shows will be American arena headliners SHINEDOWN  www.shinedown.com

Shinedown’s Zach Myers comments,
“Iron Maiden are the kings of metal and one of the greatest live bands of all time. It’s an honour to be touring with them in Europe and in their home country and to play in front of their fans. We can’t wait to see you in 2017!!!”

Tickets go on-sale Friday 30th September at 9am from www.ticketmaster.ie  As usual, there will be an exclusive pre-sale for IRON MAIDEN Fan Club members, details of which can be found on www.ironmaiden.com along with information on how Fan Club members can participate in the draw to be “First To The Barrier”.