While up in our Nation’s capital to catch VOIVOD when they played alongside ENTOMBED A.D. and LORD DYING in the Voodoo Lounge last November 15th, IMA’s Philip Morrissey was lucky enough to have the opportunity to sit down and chat with the bands vocalist, the legendary Denis “Snake” Bélanger.

Is this your first time touring with ENTOMBED, either as A.D or in their previous incarnation?

No, it is the first time. It is pretty cool because ENTOMBED A.D are cool guys. We are sharing everything I guess! On this tour especially. It has been great on this tour so far. This is the end of the third week and there is another two weeks yet to go. Enjoying every night of it. With no day off! So it’s an every night deal!

Did the tour come about due to you being on the same label?

I don’t know exactly. It seems that we had this offer quite some time ago. This year we have been pretty busy. And we were just in Europe last September. And before that it was April that we knew that they were playing here. I don’t know the circumstances really about who said what to whom. We ended up on this tour anyway and it’s been great.

Do you know much about the other support bands that you are playing with?

Well LORD DYING are from Portland Oregon. Cool band. They are doing their stuff and really original in their way. So you have different bands on the same stage, all with a very different style of metal.

VOIVOD have seemed to have been touring with a lot of bands with different styles. How does that go down? 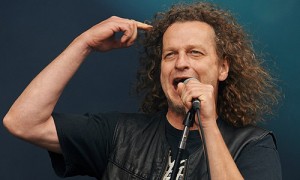 Well it’s pretty hard to find anyone that sounds like us! It’s been good for us at times and bad at other times. Because you know sometimes the touring organisation and planning will want to have the same type of band to play together. So it could be a thrash night or something like that. And we are not part of a particular section like the bay arena bands. Sometimes they tour altogether because they are all from the same area. We are not on that circuit type thing. We have always been on our own. But it’s cool because we get to play on tours with so many different bands and festivals that are different from just straight forward metal. So it’s pretty cool.

It’s lucky that you have a variety of different styles that you can call upon.

Yeah and it reflects on the audience. The audience is often mixed people. They are not all metalheads. They are coming from all spectrums of society. Sometimes it is an advantage to not just go in the same direction.

You have been playing with bands like VEKTOR in the States and Canada recently. How does it feel to have newer bands proclaim that your band is an inspiration to them?

It’s great. The VEKTOR guys are all really cool. You can hear the VOIVOD influence in their songs for sure. Certainly it is an honour to hear all of this. To see a band like them as inspired by us. They are probably the future of that particular style of music. Because obviously one day we will not be here anymore!

Your band may have been inspired by the heavier thrash bands such as KREATOR and SLAYER at the beginning, 25 or 30 years ago. The baton is being passed on to other bands now.

Yeah it’s fun. You become part of history somehow. We have been there for 33 years now and we are still going. I don’t know for how long but we are happy at the moment. Fingers crossed it will be for some time to go. Providing we don’t get sick or injured or something.

How did the recent split releases with AT THE GATES, NAPALM DEATH and now ENTOMBED A.D come together?

Well someone at the label thought it would be an interesting method of promoting the tour. I think it’s pretty cool because it is a limited edition. If you are quick enough to have picked it up or to have ordered it on-line, it could really be a collector’s item in a few years time. It is something that is definitely unique. I don’t know if it is going to be worth more later on! The idea behind it was to just be creative and to do something different. It gets to a point where just making CD’s is boring. It is fun to have a piece of plastic.

Vinyl is good. Especially for bands like us. Our fans are really into that stuff. It is all bigger and you get to see all of the small details on it. Most of our fans are collectors already. The other day we had a signing session and I swear to God one guy had like a hundred items! I had a sore hand at the end of it all. He had everything! He had additions from Japan, Live Albums, Bootlegs, Side Projects that we had done. I don’t know where he got it all from. I was looking at it all thinking to myself ‘Did we really release all of that?!’… Impressive!

The last time you played in Dublin in 2012, you dipped into the catalogue to play a few “Killing Technology” tracks.  Since “Rrroooaaarrr” is thirty years ago this year, can we expect to hear any tracks from that album tonight, because that was the album which was a gateway to what became your eventual sound?

Yeah! (laughing!). And actually it is a song that I am not going to reveal the name of but I know that many people are going to be pretty excited about. Especially if you like that album. There was a little transition after that. But certainly it was the start of us becoming more technical and progressive. But it (Rrroooaaarrr) was a pretty thrash album. It was still part of the thrash movement.
(The track played on the night was ‘Korgüll The Exterminator’)

With the splits being released, and the E.P released earlier this year, can we expect to get a new album soon?

Hopefully in 2017. We are still in the early stage of it however. The new album… we have lots of ideas for it and things we want to do. It has been difficult because we have been so busy recently in terms of touring. It is all about being able to find the time to get things done. We have just a short break and we hope to get into the studio together to put the ideas together.

We have been doing maybe 145 shows this year, plus all the stuff that the guys are doing outside of the band. So it is complicated to get everybody in the same room. We are still compiling ideas together though. You can never tell how long something is going to take because it is a piece of art, depending on the direction that you take. We said that we were going to have it as a concept album. We have to assume that. As it goes now we are piling up ideas and pretty soon we will find a way to glue it all together.

A lot of people asked me to enquire as to when VOIVOD are going to be headlining a show in Ireland again? This obviously follows on from the Deathcrusher tour last year and the show tonight.

Well we just did a headlining tour last September in Europe. It’s a matter of putting all the factors together. The financial factors, who to bring with us and so on. Business is really tough you know to tell you the truth. We would like to headline every tour that we are on. It’s just the matter of how many we are able to draw. Europe is not our territory after all. So it helps to be able to get on with these sort of tours. The last one we did ourselves was actually pretty good. It was just us and our crew with local openers. So, after the release of the next album we will try and make it happen again and to make it longer. Last September was maybe only about two and a half weeks. Hopefully after the new record next year it will happen.

Have you been marked down for any festivals next year so far?

Probably next summer we will be part of the festivals in Europe, and America as well. The summer is always going to be busy. But I don’t know where we are going to head just yet.