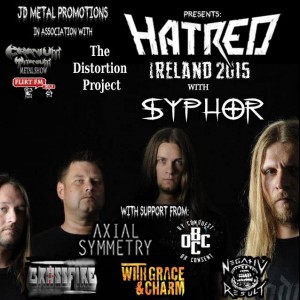 German Thrashers ‘Hatred’ along with Dublin Death Metal crew ‘Syphor‘ are touring this March playing dates East, West and North of the country with support from the up and coming ‘Axial Symmetry‘.

Hatred are no strangers to Irish shores having played here back in 2008 on an Ireland-Minitour with Ground of Ruin in support of the “Madhouse Symphonies” album. They also destroyed the city of culture playing a mind -blowing set at The Siege of Limerick IIIV in 2012 and subsequent mini-tour!

No strangers to the stage or great company, Hatred have also played some epic shows and festivals with with Amon Amarth, Dimmu Borgir, Testament, Arch Enemy and Nevermore to name a few.
So, before the release of their fifth studio album “War Of Words”, Hatred return to their beloved Ireland to play a number of shows in Galway, Dublin And Belfast.

Hatred will be co-headlining all of these shows with the mighty Syphor!

“Syphor have been very well received by critics and audiences alike, all over the European metal scene. Playing festivals and clubs in Europe the band has gone from strength to strength gaining fans worldwide and appearing in many publications including Metal Hammer (Ger), Mexico’s Mutilador Magazine, as well as many online reviews for their first album”Stained Glass Blasphemy” which the band released in February 2011″. They followed this with the amazing “For What remains” in 2013 and currently writing a new record.

You can catch Hatred and Syphor with support from Axial Symmetry on the following dates:

The Limelight 2, Belfast, Saturday 14th (With By Conquest or Consent and With Grace and Charm)