Following on from his acclaimed debut, ‘The Effa Lente Configuration: Parts 1-4′, which gained praise from respected publications the world over. With Prog Magazine describing the debut as an album that would “…resonate with fans of Red-era Crimson, Opeth and Devin Townsend as a cyclic terrorscape of dischord” whilst also noting the, “Roy Budd-like crime themes and classical piano passages permeating throughout…”.  DPRP.net had cited the album as “one moment orchestral, the next it’s heavy prog in a King Crimson, even Opeth vein, minus the vocals. It’s got the tension of some of Porcupine Tree’s darker moments, before going a bit Bach, then Vangelis before twisting through to a moody Tony Banks soundtrack piece. And that’s just the first five minutes!”. MetalIreland also added that, “…it’s hard to adequately credit what David has done with Effa Lente, it is so, so impressive.”

For An Appropriate Mourning Period  David has been joined by Florida based singer Marlo, whose vocals feature on 5 of the 7 tracks. The pair met in Dublin through a mutual friend while David was working on music for the follow-up to his 2015 epic, one-track instrumental album. After expressing an interest in working together, they did some initial recording but unfortunately, shortly after this, Marlo had to return to the U.S. so the project was put on hold.

Fast forward a year or so and Marlo was back in Ireland for a while, and with both of them eager to continue where they had left off, they soon began to stockpile tracks. Finally a clear outline and track listing for an album revealed itself and once this was realised, David then got to work producing and finishing the chosen tracks. 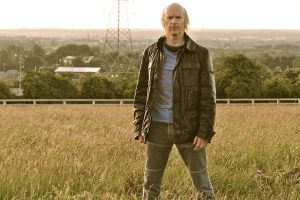 The end result is an extremely diverse album that veers from Prog to trip-hop, metal to electronic, film score to simple piano ballads. In a slightly unusual twist, most of the vocals were recorded first ‘acapella’, with the music then being written and added afterwards to complement the already recorded vocals.

In describing the album, David says, “this collaboration is a chance to explore some genres that perhaps neither of us would have done so if left to our own devices. Despite all the different styles on display, there is an overall feeling of foreboding that hangs over it, which gives it it’s coherence. Throughout each of the tracks there are many twists and turns, from the time the track starts, until it ends… and even after the end in some cases! Overall, the diversity and schizophrenic nature of the album will lure some in, and turn others away, which is exactly as it should be.”