Galway label, Cursed Monk Records, has only been active in the last year and initially focused on local West of Ireland Doom and Noise/Drone talent to date with the likes of RUAIRÍ O’BAOIGHILL, STONECARVER and WEED PRIEST already in it’s ranks, as well as the recent split cassette featuring GOURD & LUXURY MOLLUSC. But the label has now firmly set it’s sights farther afield with the signing of U.S. Doom Metal band BURN RITUAL from San Antonio, Texas. 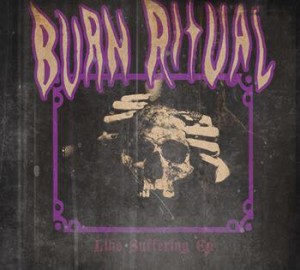 BURN RITUAL… brewing its own brand of heavy riffs, bluesy hazy vocals, and massive hypnotic fuzzed out tones. The band combine their love for traditional doom and stoner rock bands with a modern element making it a unique but familiar journey for the listener. BURN RITUAL is the brainchild of vocalist/guitarist Jake Lewis, who performed and recorded on most of the band’s debut EP “Like Suffering”, which was mastered by Tony Reed of MOS GENERATOR. The one man project soon paved way for the necessity for a full band of musicians to bring the songs to the stage the way they were meant to be heard , loud and in your face! Now a full four piece band, BURN RITUAL plans to keep performing for the rest of the year and then start recording its first full length album in the beginning of 2018 which will be released by Cursed Monk Records.

BURN RITUAL‘s positively received E.P Like Suffering was released by the band in August 2017.