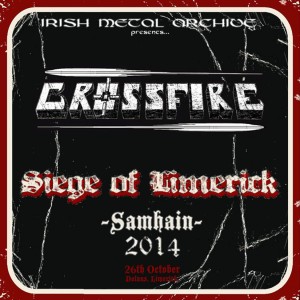 Time for another flashback to the last ‘Siege Of Limerick – Samhain 2014′. This time a few of tracks from Dublin thrashers CROSSFIRE. Unfortunately I didn’t get the start of the bands set, as I had just arrived at the venue. But most of the songs they played are there.

CROSSFIRE are a 4-piece thrash metal band from Dublin that formed around the beginning of 2013. CROSSFIRE quickly started writing material and began gigging extensively around Ireland. CROSSFIRE are currently working on material for their debut EP which is due for released through Face Melter Records Later.